K-Means Clustering is an unsupervised learning approach used in machine learning and data science to solve clustering problems. We will study what the K-means clustering method is, how it works, and how to implement it in Python in this topic.

What is K-Means Algorithm?

“It is an iterative algorithm that divides the unlabeled dataset into k different clusters in such a way that each dataset belongs only one group that has similar properties.”

It allows us to cluster data into different groups and provides a simple technique to determine the categories of groups in an unlabeled dataset without any training.

It's a centroid-based algorithm, which means that each cluster has its own centroid. The main goal of this technique is to reduce the sum of distances between data points and the clusters that they belong to.

The technique takes an unlabeled dataset as input, separates it into a k-number of clusters, and continues the procedure until no better clusters are found. In this algorithm, the value of k should be predetermined.

As a result, each cluster contains datapoints with certain commonality and is isolated from the others.

The K-means Clustering Algorithm is illustrated in the diagram below: 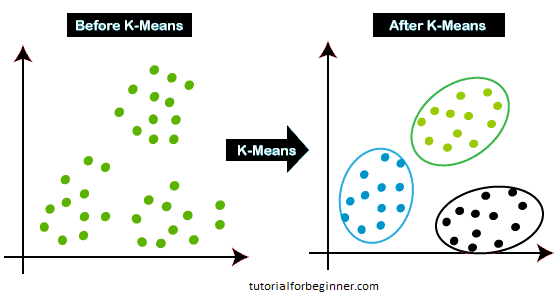 How does the K-Means Algorithm Work?

The following steps will describe how the K-Means algorithm works:

Step 2: Choose K locations or centroids at random. (It could be something different from the incoming dataset.)

Step 3: Assign each data point to the centroid that is closest to it, forming the preset K clusters.

Step 5: Determine the variance and reposition each cluster's centroid.

Step 6: If there is a reassignment, go to step-4; otherwise, move to FINISH.

Step 7: The model is now complete. 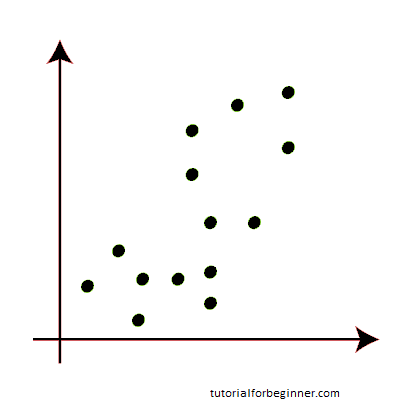 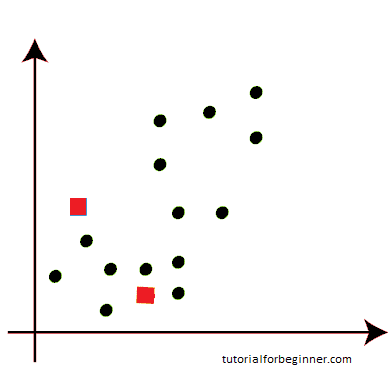 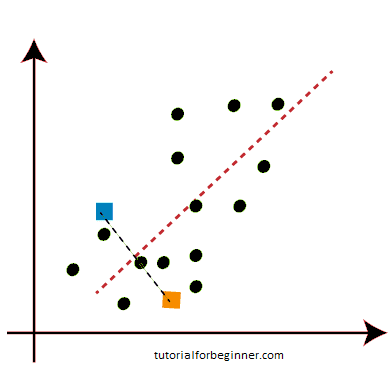 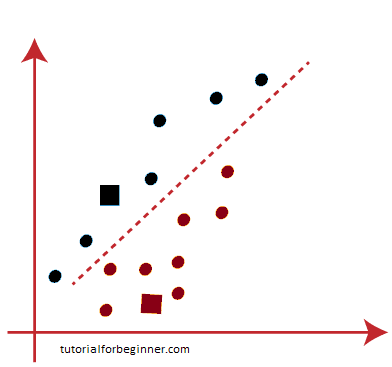 We'll repeat the process by selecting a new centroid because we need to discover the closest cluster. We will compute the center of gravity of these centroids in order to find new centroids, and we will do it as follows: 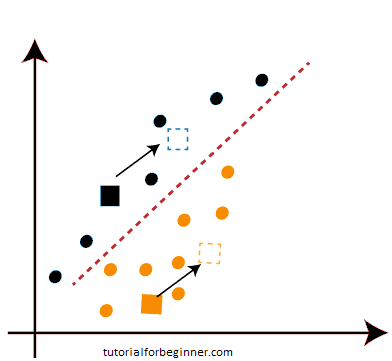 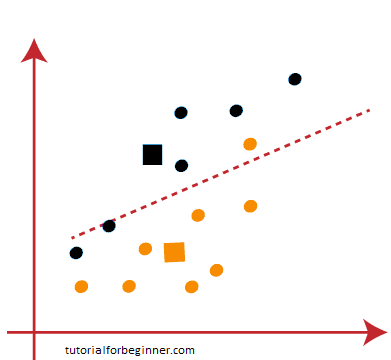 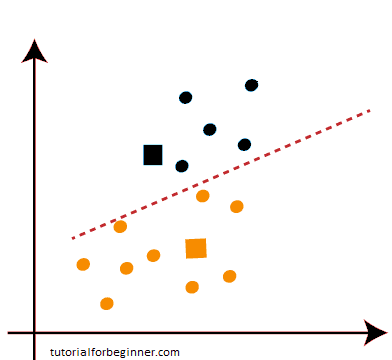 As reassignment has occurred, we will proceed to step 4, which is the search for new centroids or K-points. 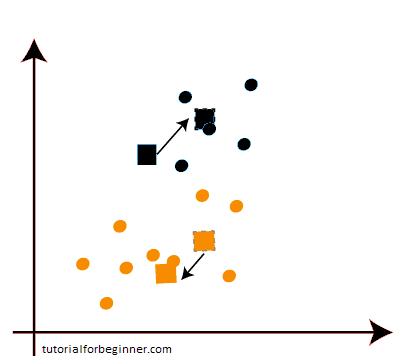 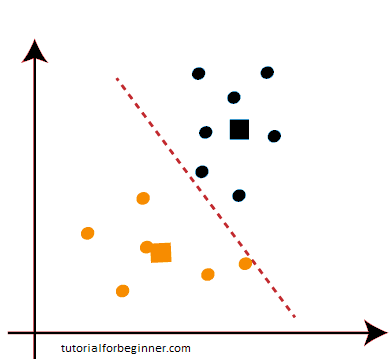 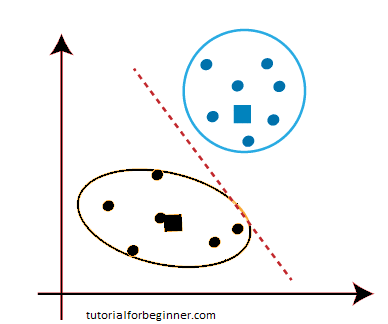 Because our model is complete, we can now delete the assumed centroids, resulting in the two final clusters shown below: 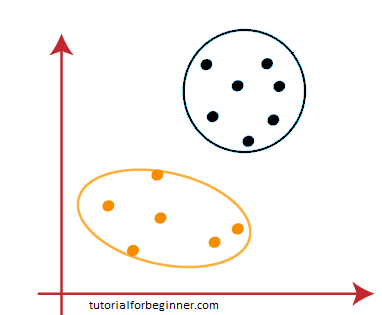 How to choose the value of "K number of clusters" in K-means Clustering?

One of the most prominent methods for determining the ideal number of clusters is the Elbow approach. This approach makes use of the WCSS value notion. Within Cluster Sum of Squares (WCSS) is a term that describes the total variations within a cluster. The formula for calculating the WCSS value (for three clusters) is as follows:

In the above formula of WCSS,

∑Pi in Cluster1 distance(PiC1) 2 : It is the sum of the square of the distances between each data point and its centroid within a cluster1 and the same for the other two terms.

We can use any method, such as the Euclidean or Manhattan distance, to calculate the distance between data points and the centroid.

The elbow method uses the methods below to determine the ideal cluster value:

Because the graph depicts a sharp bend that resembles an elbow, it is referred to as the elbow method. The elbow method's graph looks somewhat like this: 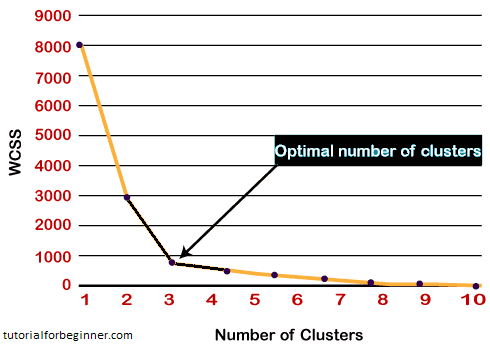 We reviewed the K-means method in the previous part; now let's look at how it may be implemented in Python.

Before we get started, let's figure out what kind of difficulty we're dealing with. So, we have a Mall Customers dataset, which contains information about customers who visit the mall and spend money there.

Customer Id, Gender, Age, Annual Income ($), and Spending Score are all included in the dataset (which is the calculated value of how much a customer has spent in the mall, the more the value, the more he has spent). We need to calculate some patterns from this dataset because it is an unsupervised method and we don't know exactly what to calculate.

The steps to be followed for the implementation are given below:

The initial phase, as with our previous topics of regression and classification, will be data pre-processing. However, it will be distinct from existing models for the clustering problem. Let's talk about it:

Numpy is used to do mathematical calculations, matplotlib is used to plot the graph, and pandas is used to manage the dataset in the code above.

By executing the above lines of code, we will get our dataset in the Spyder IDE. The dataset looks like the below image: 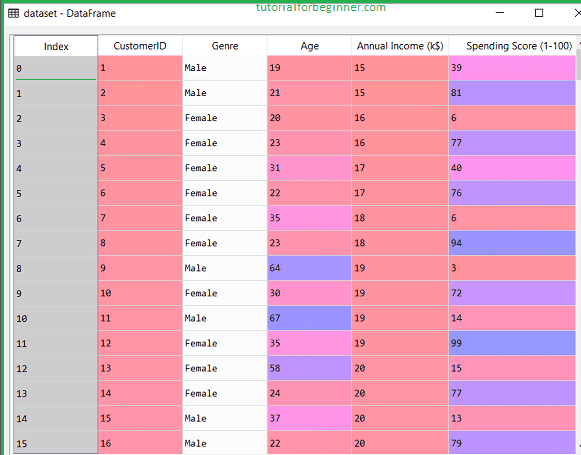 We need to detect some trends in the dataset mentioned above.

Because this is a clustering problem and we have no notion what to determine, we don't require any dependent variables for the data pre-processing stage. So, for the matrix of features, we'll merely add a line of code.

As can be seen, we are just extracting the third and fourth features. It's because we need a 2d plot to visualize the model, and some features, such as customer id, aren't required.

In the second phase, we'll try to figure out how many clusters are best for our clustering problem. As previously stated, we will employ the elbow method in this instance.

The elbow method, as we all know, draws the plot by plotting WCSS values on the Y-axis and the number of clusters on the X-axis using the WCSS idea. As a result, we'll calculate the WCSS value for various k values ranging from 1 to 10. The code for it is as follows:

To build the clusters, we used the KMeans class of the sklearn. cluster package, as seen in the preceding code.

Next, we established the wcss list variable to construct an empty list that will hold the wcss value computed for various values of k ranging from 1 to 10.

Following that, we initialized the for loop for iteration on a distinct value of k ranging from 1 to 10; because for loops in Python do not include the outbound limit, we used 11 to include the 10th number.

The rest of the code is identical to what we did in previous subjects, in that we fitted the model to a matrix of features and then plotted the graph between cluster number and WCSS.

Output: After executing the above code, we will get the below output: 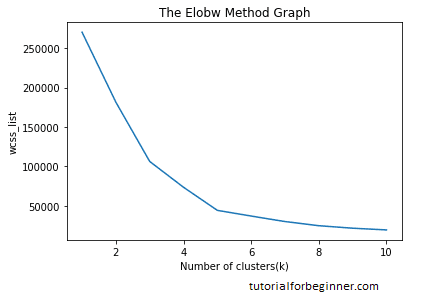 From the above plot, we can see the elbow point is at 5. So the number of clusters here will be 5. 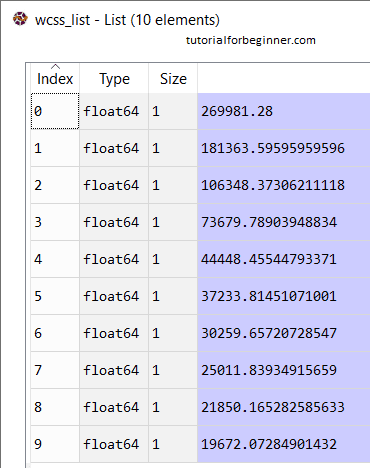 Step- 3: Training the K-means algorithm on the training dataset

We can now train the model on the dataset because we know how many clusters there are. We'll use the same two lines of code to train the model as we did in the previous section, but instead of using I we'll use 5, because there are five clusters to construct. The code is as follows:

The first line is the same as before for generating a KMeans class object.

To train the model, we created the dependent variable y predict in the second line of code.

The y predict variable is obtained by running the above lines of code. In the Spyder IDE, we can inspect it using the variable explorer option. We can now compare the y predict values to the values in our original dataset. Consider the below image:

From the above image, we can now relate that the CustomerID 1 belongs to a cluster

The clusters must then be seen as the final stage. Because our model has five clusters, we'll look at each one separately.

To visualize the clusters will use scatter plot using mtp.scatter() function of matplotlib.

We have written code for each cluster, spanning from 1 to 5, in the lines above. The mtp.scatter's initial coordinate, x[y_predict == 0, 0], contains the x value for displaying the matrix of feature values, with the y_predict range from 0 to 1. 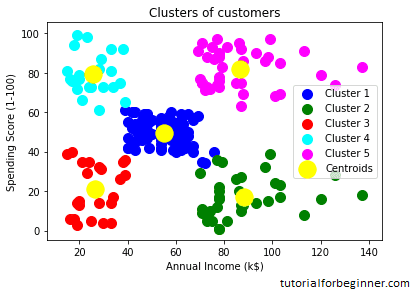 The generated graphic clearly displays the five distinct clusters in various hues. The clusters are built by two dataset parameters: customer annual income and spending. Colors and labels can be changed to suit your needs or preferences. Some points can be gleaned from the above patterns, which are listed below: