What is Support Vector Machine Algorithm?

The Support Vector Machine Algorithm, or SVM, is a popular Supervised Learning technique that may be used to solve both classification and regression issues. However, it is mostly utilized in Machine Learning for Classification difficulties.
The SVM algorithm's purpose is to find the optimum line or decision boundary for categorizing n-dimensional space into classes so that additional data points can be readily placed in the correct category in the future. A hyperplane is the name for the optimal choice boundary.
The extreme points/vectors that assist create the hyperplane are chosen via SVM. Support vectors are the extreme instances, and the algorithm is called a Support Vector Machine. Consider the diagram below, which shows how a decision boundary or hyperplane is used to classify two different categories: 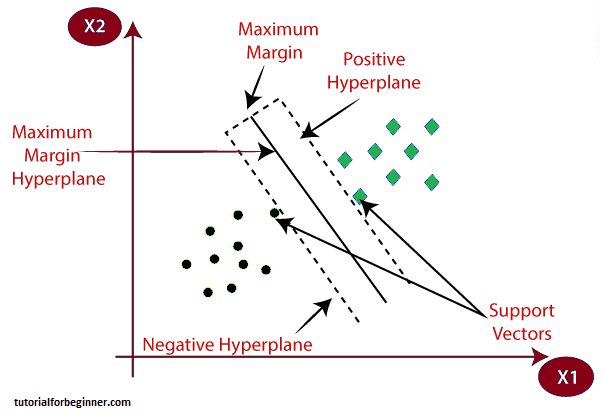 Example: The example we used in the KNN classifier can help you understand SVM. If we observe an unusual cat that also has some dog-like characteristics, we can use the SVM method to develop a model that can properly identify whether it is a cat or a dog. We'll first train our model with a large number of photographs of cats and dogs so that it can learn about their many characteristics, and then we'll put it to the test with this weird creature. As a result, the extreme case of cat and dog will be shown because the support vector forms a decision boundary between these two data (cat and dog) and chooses extreme cases (support vectors). It will be classified as a cat based on the support vectors. 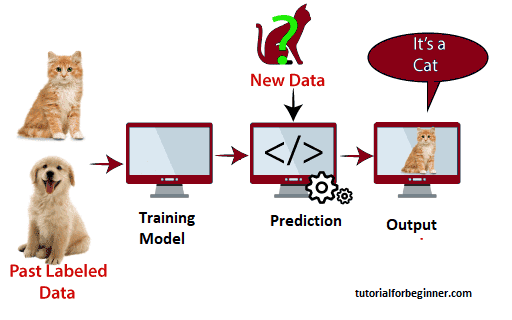 Face detection, image classification, text categorization, and other tasks can all benefit from the SVM method.

SVM can be of two types:

Hyperplane and Support Vectors in the SVM algorithm:

How does SVM works? 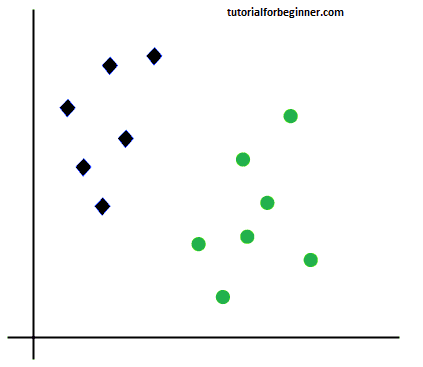 Because this is a two-dimensional space, we can easily separate these two classes by drawing a straight line between them. However, numerous lines can be used to divide these classes. Consider the following illustration: 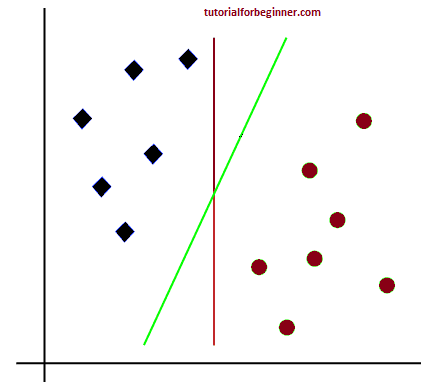 As a result, the SVM method aids in the discovery of the best line or decision boundary, which is referred to as a hyperplane. The SVM method locates the intersection of the lines from both classes. Support vectors are the names given to these points. Margin is the distance between the vectors and the hyperplane. The purpose of SVM is to increase this margin as much as possible. The ideal hyperplane is the one with the greatest margin. 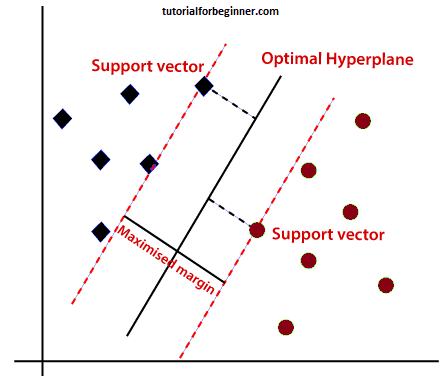 We can separate data that is linearly structured using a straight line, but we cannot draw a single straight line for non-linear data. Consider the following illustration:

So we'll need to add another dimension to distinguish these data pieces. We've utilized two dimensions for linear data, x and y, so we'll add a third dimension, z, for non-linear data. It can be calculated using the following formula:

The example space will look like this after adding the third dimension: 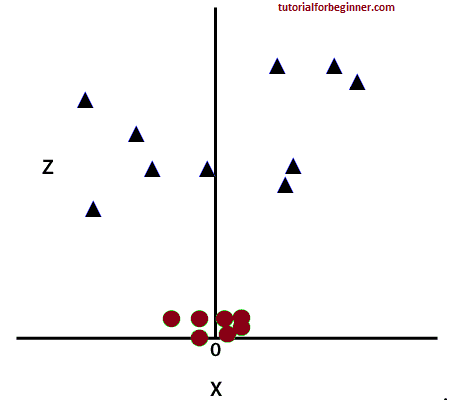 So now, SVM will divide the datasets into classes in the following way. Consider the below image: 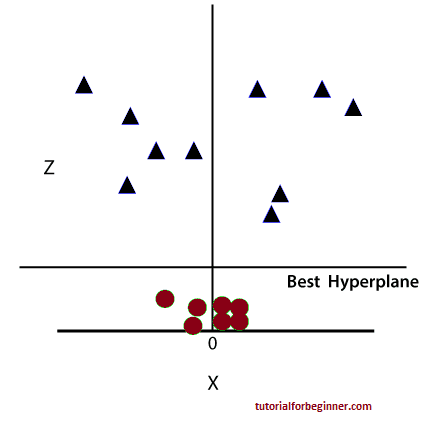 Because we are in 3-d space, it appears to be a plane parallel to the x-axis. If we convert it to 2d space with z=1, it looks like this: 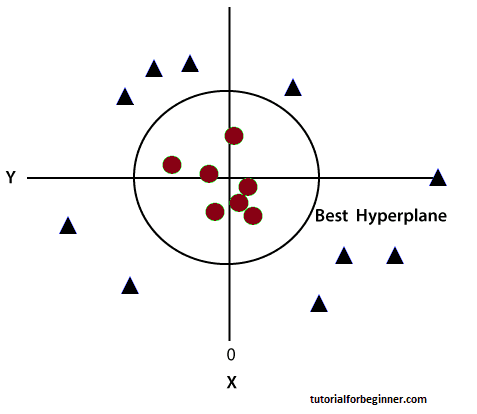 In the case of non-linear data, we get a circumference of radius 1.

Now we'll use Python to develop the SVM algorithm. We'll use the same dataset user data that we used for KNN classification and Logistic regression.

The code will remain the same till the Data pre-processing stage. The code is as follows:

We will pre-process the data after executing the above code. The code will give the dataset as: 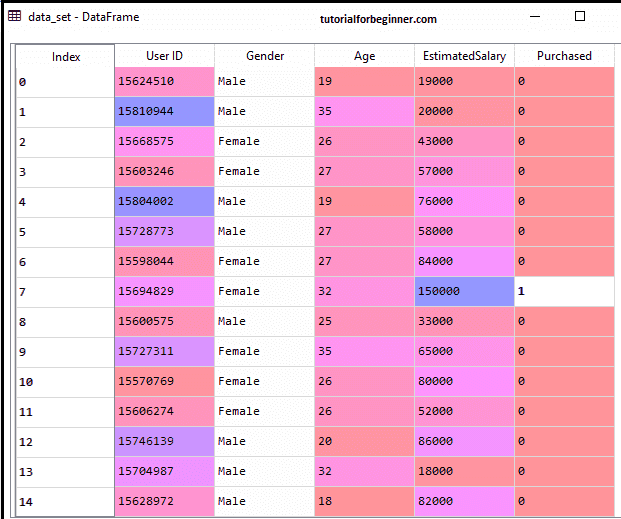 The scaled output for the test set will be: 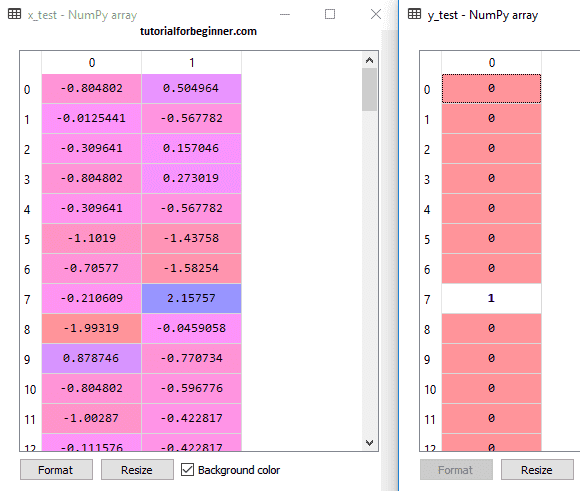 Fitting the SVM classifier to the training set:

The SVM classifier will now be fitted to the training set. We'll use the SVC class from the Sklearn.svm package to build the SVM classifier. The code for it is as follows:


We used kernel='linear' in the above code since we are generating SVM for linearly separable data. For non-linear data, though, we can adjust it. The classifier was then fitted to the training dataset (x train, y train).

Change the values of C(Regularization factor), gamma, and kernel to vary the model's performance.

We'll now predict the output for the test set. We'll do this by creating a new vector called y pred. The code for I is shown below.


After getting the y pred vector, we can compare the y pred and y test results to see how much the actual value differs from the anticipated value.

The following is the output for the test set prediction: 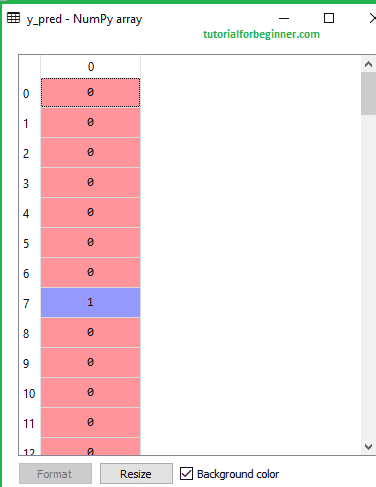 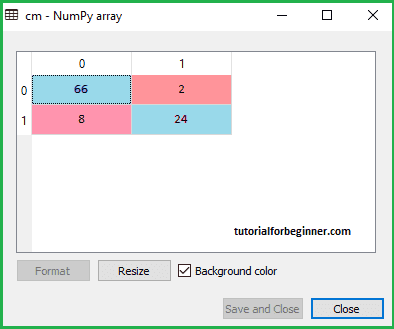 The result of the training set will now be visualized; the code for this may be seen below:

By executing the above code, we will get the output as: 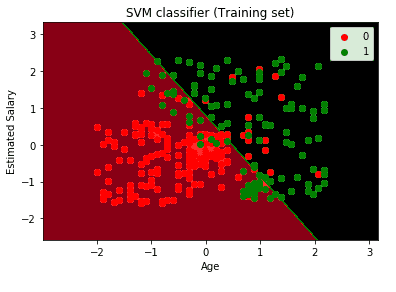 As can be seen, the above output looks a lot like the Logistic regression output. We received the straight line as hyperplane in the output since we utilized a linear kernel in the classifier. We've already shown that the hyperplane in SVM is a straight line in 2d space.

By executing the above code, we will get the output as: 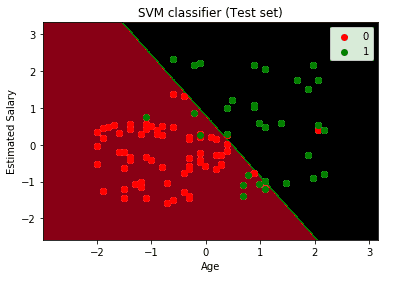 The SVM classifier has separated the users into two zones, as shown in the above output image (Purchased or Not purchased). Users who bought the SUV are represented by the red scatter spots. Users who did not purchase the SUV are represented by green scatter points in the green region. The hyperplane has separated the two classes into variables that have been purchased and variables that have not been purchased.