In this page, we will learn about Adversarial Search in Artificial Intelligence (AI), Adversarial Search, Zero-Sum Game, Zero-sum game: Embedded thinking, Formalization of the problem, Game tree, and Example Explanation of Game tree.

Adversarial search is a type of search in which we look at the problem that develops when we try to plan ahead of the world while other agents plan against us.

Note: In this topic we'll talk about deterministic games, fully observable environments, zero-sum games, and where each agent acts alternately.

The Zero-sum game entails embedded reasoning, in which one agent or player attempts to determine:

Each player is trying to figure out how his opponent will react to his moves. To address gaming problems in AI, this necessitates embedded thinking or backward reasoning.

Formalization of the problem:

A game is a type of AI search that can be structured into the following elements:

A game tree is a tree in which the nodes represent game states and the edges represent player moves. Initial state, actions function, and result function are all part of the game tree.
Example: Tic-Tac-Toe game tree:

The following are some of the game's most important features of Tic-Tac-Toe game tree. 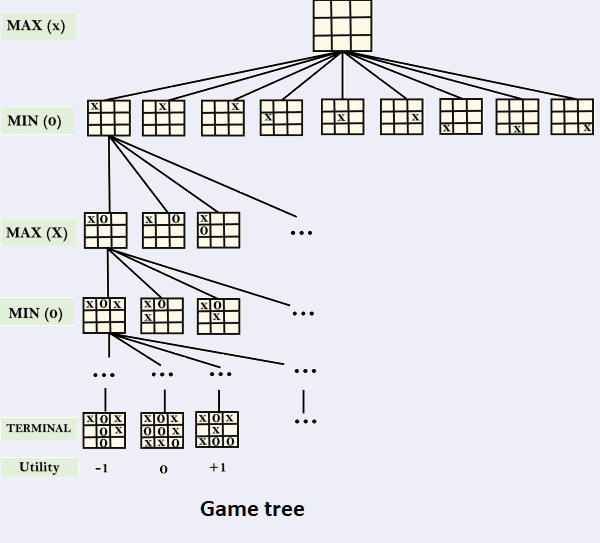 As a result, the adversarial Search for the Minimax technique is: