There are basically four ways of knowledge representation and these are given as follows:

The types of knowledge that must be represented in AI systems are as follows: 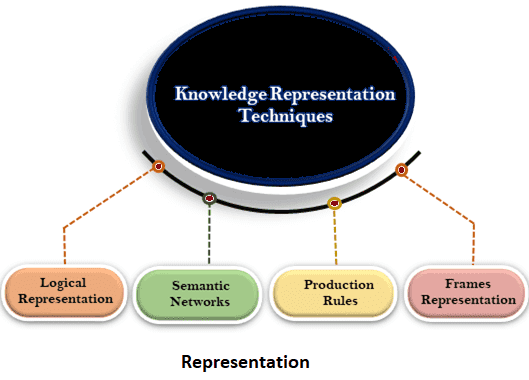 A language with certain concrete principles that deals with propositions and has no ambiguity in representation is referred to as logical representation. Drawing a conclusion based on numerous criteria is referred to as logical representation. Some important communication guidelines are laid out in this diagram. It's made up of well-defined syntax and semantics that facilitate sound inference. Each sentence could be translated into logics using the syntax and semantics.

The various types of knowledge are as follows:

For knowledge representation, semantic networks are an alternative to predicate logic. We can express our knowledge in Semantic Networks as graphical networks. This network is made up of nodes that represent things and arcs that describe their relationships. Semantic networks may classify objects in a variety of ways and link them together.

This representation consists of basically two types of relations:

Example: Some statements which we have to represent in the form of nodes and arcs are as follows. 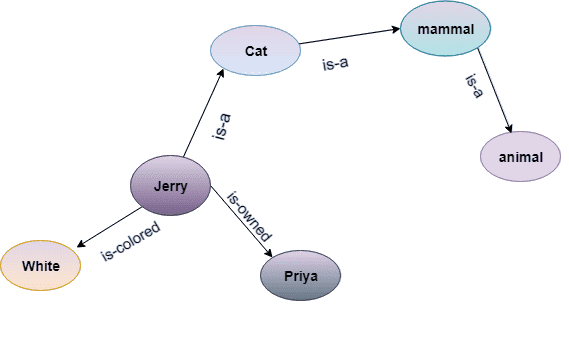 We've used nodes and arcs to represent different types of knowledge in the diagram above. Each object has some sort of relationship with another object.


A frame is a record-like structure that contains a set of properties and their values to describe a physical thing. Frames are a sort of artificial intelligence data structure that splits knowledge into substructures by depicting stereotyped situations. It is made up of a set of slots and slot values. These slots can come in any shape or size. Facets are the names and values assigned to slots.
Facets: Facets are the numerous aspects of a slot machine. Facets are characteristics of frames that allow us to constrain them. Example: When data from a specific slot is required, IF-NEEDED facts are used. A frame can have any number of slots, each of which can contain any number of facets, each of which can have any number of values.

Semantic networks gave rise to frames, which later evolved into our modern-day classes and objects. A single frame is of limited utility. A frames system is made up of a group of interconnected frames. Knowledge about an object or event can be kept in the knowledge base in the frame. The frame is a form of technology that can be used in a wide range of applications.

Let's take an example of a frame for a book

Let's pretend we're dealing with an entity, Peter. Peter is a professional engineer, and he is 25 years old. He lives in the city of London, in the country of England. The frame representation for this is as follows:

Production rules system consists of (condition, action) pairs which means, "If condition then action". It has basically three parts:


The agent in production rules checks for the condition, and if it exists, the production rule fires and the appropriate action is taken. The rule's condition component determines which rule can be used to solve an issue. The action portion, on the other hand, is responsible for carrying out the corresponding problem-solving actions. A recognize-act cycle is the name given to the entire procedure.

Working memory stores a description of the present state of problem-solving, and rules can be used to write knowledge to it. Other rules may be triggered by this knowledge.

If a new scenario (state) arises, numerous production rules will be fired at the same time, which is known as a conflict set. In this case, the agent must choose a rule from among these sets, and it is called a recognize-act cycle.