What is First Order Logic in Artificial intelligence?

1."Some humans are intelligent", or
2."Sachin likes cricket."

PL logic is insufficient to represent the above statements, so we required some more powerful logic, such as first-order logic.

The following are two types of first-order logic statements:

Consider the following statement: "x is an integer." It has two parts: the first component, x, is the statement's subject, and the second half, "is an integer," is a predicate.

A universal quantifier is a logical symbol that indicates that a statement inside its range is true for everything or every instance of a specific thing.

A symbol that resembles an inverted A is used to represent the Universal quantifier.

Note: the implication of universal quantifier is "→".
If x is a variable, then ∀x is read as:

All man drink coffee.
Let a variable x which refers to a cat so all x can be represented in UOD as below: 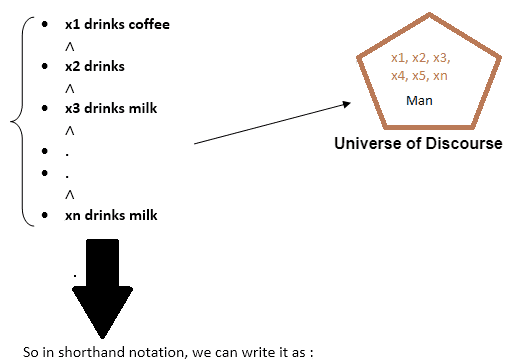 Existential quantifiers are a sort of quantifier that expresses that a statement is true for at least one instance of something within its scope.

The logical operator resembles an inverted E and is used to represent it. It is referred to be an existential quantifier when it is employed with a predicate variable

Note: we always use the AND or Conjunction symbol (∧) in Existential quantifiers.

If x is a variable, the existential quantifier is either x or (x). And it will be written like follows:

Some boys are intelligent. 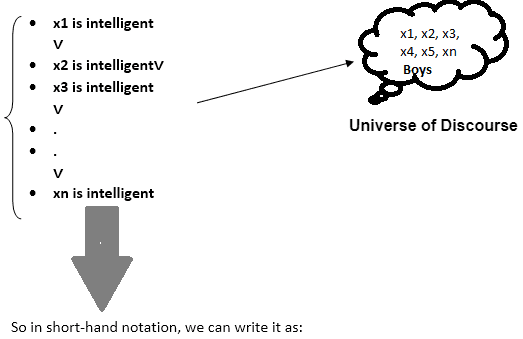 ∃x: boys(x) ∧ intelligent(x)
It will be read as: There are some x where x is a boy who is intelligent.

Some Examples of FOL using quantifier:

The quantifiers interact with variables that exist in the right order. First-order logic has two sorts of variables, which are listed below:

Bound Variable: In a formula, a variable is considered to be a bound variable if it exists within the quantifier's scope.
Example: ∀x [A (x) B( y)], here x and y are the bound variables.