What is Hill Climbing Algorithm in Artificial Intelligence?

Some main features of Hill Climbing Algorithm are:

Greedy approach: The hill-climbing algorithm searches in the direction that saves the most money.

The state-space landscape is a visual portrayal of the hill-climbing algorithm that depicts a graph between the program's many stages and the Objective function/Cost. 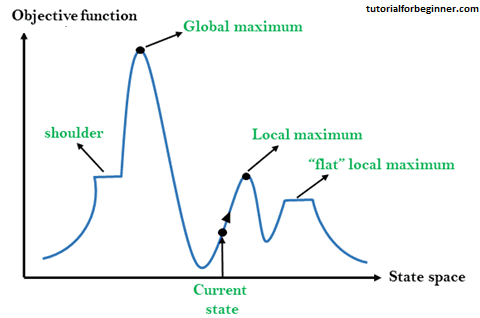 The simplest approach to create a hill climbing algorithm is to use simple hill climbing. Only one neighbor node state is evaluated at a time, and the first one that optimizes current cost is chosen as the current state. It just checks one successor state, and if it finds it to be better than the present state, it moves to that state. Otherwise, it stays in the current state. The following are the characteristics of this algorithm:

Step 1: Assess the current state; if it is a goal state, return success and stop.

Step 2: Create a loop until a solution is found or no new operators are available.

Step 3: Choose an operator and apply it to the current state.

A version of the simple hill climbing algorithm is the steepest-Ascent algorithm. This algorithm analyses all of the current state's nearby nodes and chooses the one that is closest to the goal state. Because it searches for numerous neighbors, this method takes longer.

Step 2: Loop until a solution is found or the current state does not change.

Stochastic hill climbing does not check for all of its neighbors before moving. Rather, this search method chooses one neighbor node at random as the current state and decides whether to study another state.

Solution: Backtracking is a technique that can be used to solve the local maximum in a state space landscape. Make a list of the potential paths so that the algorithm can go back in time and expand the search space and other paths.

2. Plateau: A plateau is a flat portion of the search space in which all of the neighbor states of the current state have the same value, indicating that the algorithm has failed to determine the optimum path to take. In the plateau area, a hill-climbing search could be lost.

Solution: The solution to the plateau is to take large or small steps while seeking for a solution to the problem. Select a state at random that is far distant from the present state so that the algorithm can discover a non-plateau region.

3. Ridges: A ridge is a type of local maximum that is distinct from the others. It has a higher surface area than its surroundings, but it is also on a hill and cannot be reached in a single movement.

Solution: We may improve this problem by using bidirectional search or travelling in different directions.

A hill-climbing algorithm that never moves towards a lower value is certain to be incomplete because it can get trapped on a local maximum. And if the process uses a random walk to move a successor, it may be complete yet inefficient. Simulated Annealing is a method for obtaining both efficiency and completeness.

Annealing is a mechanical term for the process of hardening a metal or glass to a high temperature and then gradually cooling it to achieve a low-energy crystalline state. Simulated annealing employs the same approach, with the algorithm selecting a random move rather than the optimum. If the random motion improves the situation, it will continue on its current path. If not, the algorithm will not work. Otherwise, the algorithm takes the option with the lowest probability or continues downhill and chooses a different path.