Resolution in FOL in Artificial intelligence

What is Resolution in FOL?

Resolution is a method of theorem proof that involves constructing refutation proofs, or proofs by contradictions. It was created in 1965 by a mathematician named John Alan Robinson.

When several statements are supplied and we need to prove a conclusion from those claims, we employ resolution. In proofs by resolutions, unification is a crucial idea. Resolution is a single inference rule that can work on either the conjunctive normal form or the clausal form efficiently.

Clause: A clause is a disjunction of literals (an atomic sentence). It's sometimes referred to as a unit clause.

Conjunctive Normal Form (CNF): Conjunctive normal form (CNF) is a sentence that is represented as a conjunction of clauses.

Note: Firstly learn the FOL in AI, to better understand this topic.

The propositional rule is just a lifted version of the resolution rule for first-order logic. If two clauses include complementary literals that are expected to be standardized apart so that they share no variables, resolution can resolve them.

Where li and mj are complementary literals, there is a resolution in FOL.
Because it only resolves perfectly, this rule is also known as the binary resolution rule .

We can determine two clauses which are given below:

These literals could be unified with unifier θ= [a/f(x), and b/x] , and it will bring about a resolvent clause:

To better comprehend all of the preceding phases, we shall use resolution as an example.

Step-1: Conversion of Facts into FOL

We'll start by converting all of the given propositions to first-order logic. 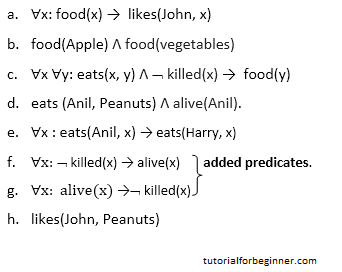 Step-2: Conversion of FOL into CNF

Step 3: Reverse the statement that needs to be proven.

We will use negation to write the conclusion assertions in this statement, which will be written as "likes" (John, Peanuts) 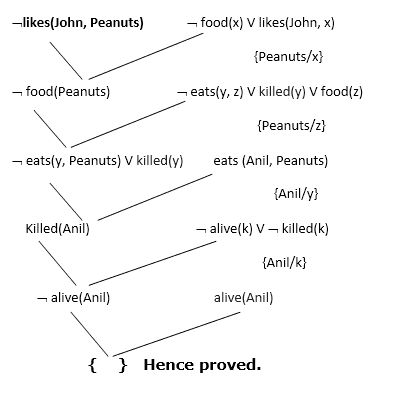 As a result, the conclusion's negation has been demonstrated to constitute a total contradiction with the given collection of truths.

Step 4: Create a graph of resolution:

In this stage, we'll use a resolution tree and substitution to solve the problem. It will be as follows for the aforesaid problem: