In this page we will learn about What is Bayesian Belief Network in artificial intelligence?, Joint probability distribution, Explanation of Bayesian network, The semantics of Bayesian Network.

What is Bayesian Belief Network in artificial intelligence?

Real-world applications are probabilistic in nature, and we require a Bayesian network to express the link between various events. It can also be utilized for tasks like prediction, anomaly detection, diagnostics, automated insight, reasoning, time series prediction, and decision making in uncertain situations.

The Bayesian Network is made up of two pieces that can be used to create models from data and expert opinions:

An Influence diagram is a generalized type of Bayesian network that illustrates and solves decision problems under uncertain knowledge. 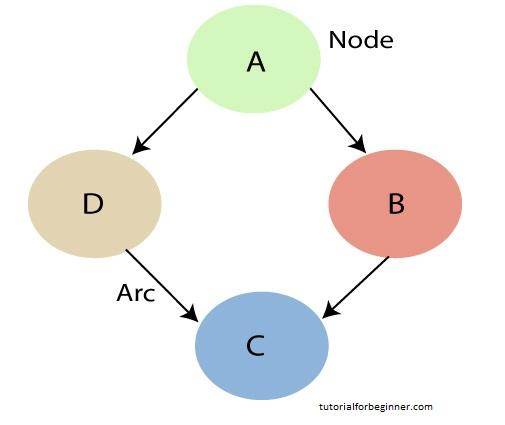 Each node represents a random variable, which can be either continuous or discontinuous.
The causal relationship or conditional probabilities between random variables are represented by arcs or directed arrows. These directed links, also known as arrows, connect the graph's two nodes.

Note: There are no circular graphs in the Bayesian network graph. As a result, it's referred to as a directed acyclic graph, or DAG.

The Bayesian network is made up of two primary parts.

In general for each variable Xi, we can write the equation as:

Let's look at an example of a Bayesian network by making a directed acyclic graph:

Example: To detect burglary, Harry put a new burglar alarm at his home. The alarm is not only capable of detecting a burglary, but it can also detect mild earthquakes. Harry has two next-door neighbors, David and Sophia, who have agreed to notify Harry at work if they hear the alarm. When David hears the alarm, he always phones Harry, but sometimes he gets confused with the phone ringing and calls at that time as well. Sophia, on the other hand, enjoys listening to loud music and occasionally misses the alarm. We'd like to calculate the likelihood of a burglary alarm in this case.

Calculate the probability that alarm has sounded, but there is neither a burglary, nor an earthquake occurred, and David and Sophia both called the Harry.

We can express the occurrences in the problem statement as probability: Using joint probability distribution, P[D, S, A, B, E] may rewrite the preceding probability statement: 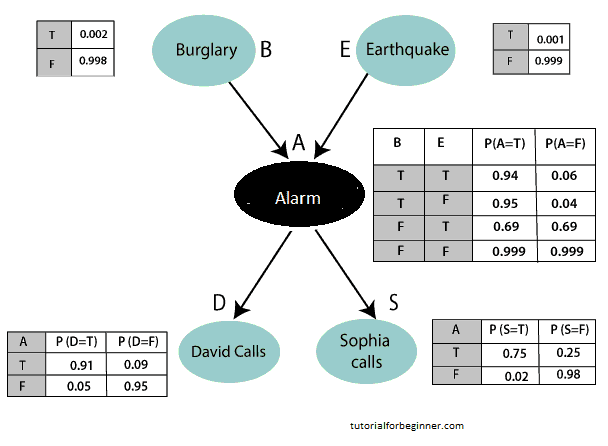 We can provide the conditional probabilities as per the below tables:

Conditional probability table for Alarm A:

The Conditional probability of Alarm A depends on Burglar and earthquake:

Sophia's conditional chance of calling is determined by its Parent Node "Alarm."

We may formulate the issue statement in the form of a probability distribution using the joint distribution formula:

Therefore, a Bayesian network can answer any query about the domain by using Joint distribution.

The semantics of Bayesian Network:

The semantics of the Bayesian network can be understood in two ways, as shown below:

1. To understand the network as the representation of the Joint probability distribution.

It is useful to understand how to construct the network.

2. To understand the network as an encoding of a collection of conditional independence statements.

It is useful in designing inference procedure.