For experts, Artificial Intelligence is not a new term or a new technology. This technology is actually much older than you might think. In Ancient Greek and Egyptian mythologies, there are indeed tales of mechanical men. The milestones in the history of AI that define the route from AI generation to current development are listed below. 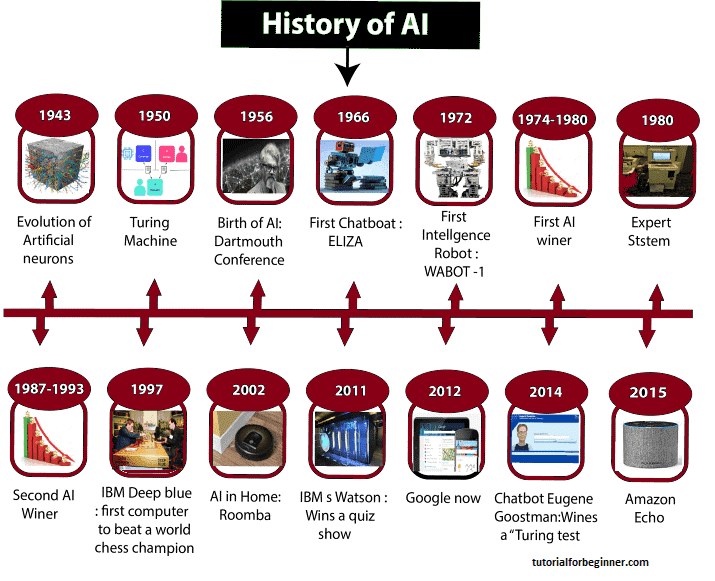 High-level computer languages like FORTRAN, LISP, and COBOL were invented at the period. And there was a lot of interest in AI at the time.

The American Association of Artificial Intelligence hosted its first national conference at Stanford University in 1980.

Google introduced an AI application called "Duplex" that acted as a virtual assistant and took a hairdresser appointment over the phone, and the lady on the other end didn't realize she was talking with a machine.

AI has now advanced to a phenomenal level. Deep learning, big data, and data science are all hot topics at the moment. Companies such as Google, Facebook, IBM, and Amazon are now using AI to create incredible technologies. Artificial Intelligence's future is exciting, and it will be highly intelligent.

The following are some of the areas where Artificial Intelligence is used:

Artificial Intelligence (AI) can be extremely helpful in resolving complicated challenges in the universe. AI technology can assist in gaining a better understanding of the cosmos, including how it operates, its origin, and so on.

In the previous five to ten years, AI has become more beneficial to the healthcare business and is expected to have a big impact.

AI is being used in the healthcare industry to make better and faster diagnoses than humans. AI can assist doctors with diagnosis and can alert doctors when a patient's condition is deteriorating so that medical assistance can be provided before the patient is admitted to the hospital.

AI can be employed in video games. AI machines can play strategic games like chess, in which the system must consider a vast number of different options.

The banking and AI businesses are the ideal complements to each other. Automation, chatbots, adaptive intelligence, algorithm trading, and machine learning are all being used in financial activities.

Data security is critical for every business, and cyber-attacks are on the rise in the digital age. AI can help you keep your data safe and secure. Some examples are the AEG bot and the AI2 Platform, which are used to better determine software bugs and cyber-attacks.

Facebook, Twitter, and Snapchat, for example, have billions of user accounts that must be kept and handled in a very efficient manner. AI has the ability to organize and manage large volumes of data. AI can go through a large amount of data to find the most recent trends, hashtags, and user requirements.

For the travel industry, AI is becoming increasingly important. AI is capable of doing a multitude of travel-related tasks, including making travel arrangements and recommending hotels, flights, and the best routes to customers. The travel industry is utilizing AI-powered chatbots that can engage with clients in a human-like manner to provide better and faster service.

Various industries are presently working on self-driving automobiles that will make your ride safer and more secure.

In Robotics, Artificial Intelligence (AI) plays a significant role. Typically, conventional robots are programmed to execute a repetitive task; but, using AI, we may construct intelligent robots that can perform tasks based on their own experiences rather than being pre-programmed.

Humanoid Robots are the best instances of AI in robotics; recently, the intelligent Humanoid Robots Erica and Sophia were built, and they can converse and behave like people.

We already use AI-based applications in our daily lives with entertainment providers like Netflix and Amazon. These services display software or show recommendations using machine learning / artificial intelligence (ML/AI) algorithms.

AI is giving the e-commerce industry a competitive advantage, and it is becoming increasingly demanded in the market. Shoppers can use AI to find related products in their preferred size, color, or brand.

In education, artificial intelligence (AI) can automate grading so that the tutor can spend more time teaching. As a teaching assistant, an AI chatbot can communicate with students.

In the future, AI could serve as a personal virtual tutor for pupils, available at any time and from any location.