The Wumpus World in Artificial intelligence

The Wumpus World in Artificial intelligence

The Wumpus world is a basic world example that demonstrates the value of a knowledge-based agent and how knowledge representation is represented. It was inspired by Gregory Yob's 1973 video game Hunt the Wumpus.

The Wumpus world is a cave with 4/4 rooms and pathways connecting them. As a result, there are a total of 16 rooms that are interconnected. We now have a knowledge-based AI capable of progressing in this world. There is an area in the cave with a beast named Wumpus who eats everybody who enters. The agent can shoot the Wumpus, but he only has a single arrow. There are some Pits chambers in the Wumpus world that are bottomless, and if an agent falls into one, he will be stuck there indefinitely. The intriguing thing about this cave is that there is a chance of finding a gold heap in one of the rooms. So the agent's mission is to find the gold and get out of the cave without getting eaten by Wumpus or falling into Pits. the agent returns with gold, he will be rewarded, but if he is devoured by Wumpus or falls into the pit, he will be penalized.

Note: Wumpus is immobile in this scene.

A sample diagram for portraying the Wumpus world is shown below. It depicts some rooms with Pits, one room with Wumpus, and one agent in the world's (1, 1) square position. 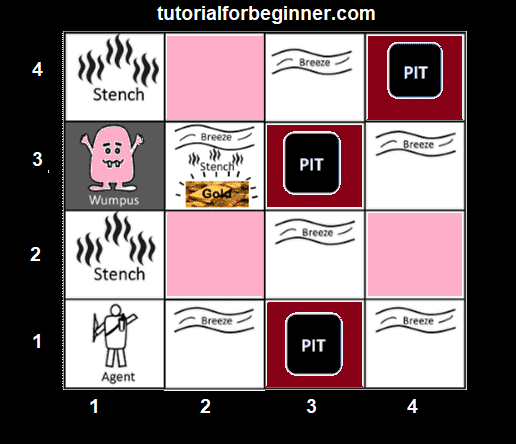 There are also some components which can help the agent to navigate the cave. These components are given as follows:

We have given PEAS description as below to explain the Wumpus world:

Following are some basic facts about propositional logic:

Now we will explore Wumpus world a bit and will explain how the agent will find its goal applying logical reasoning.

Agent does not detect any wind or Stench in Room [1,1], indicating that the nearby squares are similarly in good condition. 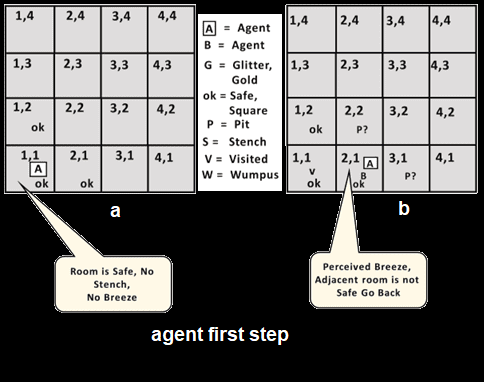 Now the agent will pause and consider his options before doing any potentially destructive actions. The agent will return to room [1, 1]. The agent visits the rooms [1,1] and [2,1], thus we'll use the symbol V to symbolize the squares he's been to. 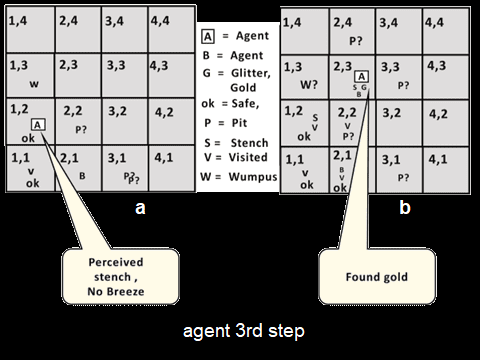 Because there is no odor and no breeze in room [2,2], let's assume the agent decides to move to room [2,3]. Agent detects glitter in room [2,3], thus it should collect the gold and ascend out of the cave.