In this page we will learn about What is Turing Test in Artificial Intelligence (AI)?, Chatbots to attempt the Turing test,The Chinese Room Argument.

What is Turing Test in Artificial Intelligence (AI)?

Alan Turing devised a test in 1950 to determine whether a machine can think like a person. This test is known as the Turing Test. Turing claimed that a machine is intelligent if it can duplicate human responses under particular conditions in this test.

Turing proposed the Turing Test in his 1950 work "Computing Machinery and Intelligence," which addressed the question "Can Machine think?" 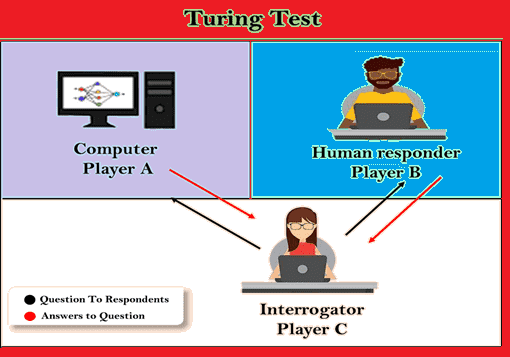 The Turing test is based on a modified version of the party game "Imitation game." This game has three participants: one is a computer, another is a human responder, and the third is a human interrogator who is separated from the other two players and whose duty is is to figure out which of the two is a machine.

A modified version of the party game "Imitation game" serves as the basis for the Turing test. There are three players in this game: one is a computer, another is a human responder, and the third is a human interrogator who is separated from the other two players and whose task is to determine which of the two is a machine.

Because all players communicate via keyboard and screen, the outcome is unaffected by the machine's capacity to transform words into speech.

The exam result is determined not by the number of correct answers, but by how closely the responses resemble those of a human. The computer is allowed to do whatever it can to force the interrogator to make a false identification.

Interrogator: Are you a computer?

Player A (Computer): No

Player A: Long pause and give the wrong answer.

If an interrogator is unable to distinguish between a machine and a human in this game, the computer passes the test, and the machine is said to be intelligent and capable of thinking like a human.

Hugh Loebner, a New York businessman, announces a prize competition in 1991, promising $100,000 to the first computer to pass the Turing test. However, no AI computer has ever come close to passing the Turing test in its purest form."

Chatbots to attempt the Turing test:

ELIZA: Joseph Weizenbaum designed ELIZA, a natural language processing computer program. It was made to demonstrate the ability of machines and humans to communicate. It was one of the first chatterbots to put the Turing Test to the test.

Parry: Kenneth Colby designed a chatterbot named Parry in 1972. Parry was created to represent a person suffering from paranoid schizophrenia (most common chronic mental disorder). "ELIZA with attitude" was how Parry was described. In the early 1970s, Parry was put to the test using a variant of the Turing Test.

Eugene Goostman: Eugene Goostman was a chatbot that was created in Saint Petersburg in 2001. This bot has taken part in a number of Turing Tests. Goostman won the competition billed as the largest-ever Turing test content in June 2012, convincing 29 percent of the judges that it was a human. Goostman had the appearance of a 13-year-old virtual boy.

Many philosophers were strongly opposed to the concept of Artificial Intelligence as a whole. "Chinese Room" was the most famous debate on this list.

In his paper "Mind, Brains, and Program," published in 1980, John Searle proposed the "Chinese Room" thought experiment, which argued against the validity of Turing's Test. He said, "Programming a computer may make it to understand a language, but it will not produce a real understanding of language or consciousness in a computer."

He claimed that while machines like ELIZA and Parry could pass the Turing test by manipulating keywords and symbols, they lacked a true knowledge of language. As a result, it cannot be described as a machine's "thinking" capabilities.

Features required for a machine to pass the Turing test: