In this topic, we'll look at the knowledge engineering process in the context of an electronic circuit, which we're already familiar with. This method is best suited for developing specialized knowledge bases.

The knowledge-engineering process is broken down into the following steps. We will construct a knowledge foundation that will allow us to reason about the digital circuit (One-bit full adder) that is shown below using these techniques. 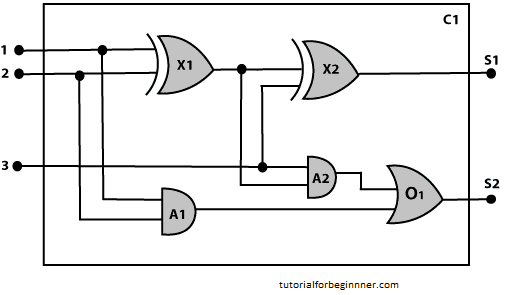 The initial stage in the procedure is to determine the task, and there are several reasoning tasks for the digital circuit.

We'll look at the circuit's functionality at the highest level, or first level:

At the second level, we will inspect the circuit structure details such as:

Selecting functions, predicates, and constants to represent circuits, terminals, signals, and gates is the next phase in the process. To begin, we'll separate the gates from one another and from other items. Each gate is represented as an object with a unique name, such as Gate(X1). ach gate's functionality is determined by its type, which is represented by constants such as AND, OR, XOR, and NOT. A predicate will be used to identify circuits: Circuit(C1).

For the terminal, we will use predicate: Terminal(x).

The connectivity between gates can be represented by predicate Connect(Out(1, X1), In(1, X1)).

We use a unary predicate On(t), which is true if the signal at a terminal is on.

4. Encode general knowledge about the domain:

5. Encode a description of the problem instance:

Now, in order to decode the problem of circuit C1, we must first classify the circuit and its gate components. This phase is simple if the problem's ontology has already been considered. This step entails writing simple atomic sentences of idea instances, which is referred to as ontology.

We may encode the issue instance in atomic phrases for the given circuit C1 as follows:

Because there are two XOR gates, two AND gates, and one OR gate in the circuit, the atomic sentences for these gates will be:

And then represent the connections between all the gates.

Note: Ontology defines a particular theory of the nature of existence.

6. Pose queries to the inference procedure and get answers:

We'll find all of the possible values for all of the terminals in the adder circuit in this stage. The initial question will be:

What input combination should result in the first output of circuit C1 being 0 and the second output being 1?

7. Debug the knowledge base:

We may have missed statements like 1≠ 0 in the knowledge base.