In this page we will learn about How means-ends analysis Works, Operator Subgoaling, Algorithm for Means-Ends Analysis, Example of Mean-Ends Analysis.

The discrepancy between the existing state and the goal state was evaluated during the MEA analysis procedure.

The means-ends analysis approach can be used to solve a problem in a recursive manner. It's a problem-solving method for controlling search. The following are the main steps that describe how the MEA technique for problem solving works.

We detect disparities between the existing state and the goal state during the MEA process. Once these discrepancies have occurred, we can use an operator to decrease them. However, there are situations when an operator cannot be applied to the existing state. So we build a subproblem of the current state in which an operator can be applied; this sort of backward chaining, in which operators are chosen and then sub goals are established to define the operator's preconditions, is known as Operator Subgoaling.

Let's take Current state as CURRENT and Goal State as GOAL, then the steps for the MEA algorithm are following.

Step 1: Compare CURRENT and GOAL, and if there are no discrepancies, return Success and Exit.

Step 2: If not, choose the most significant difference and lessen it by following the steps below until success or failure is achieved.

The algorithm described above is better suited to tackling simple problems than it is to solving complex problems. 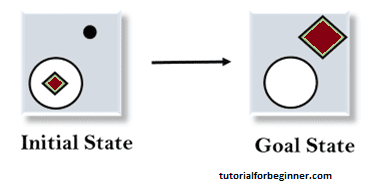 To solve the problem, we will first identify the differences between starting and goal states, then construct a new state and apply the operators to each difference. For this problem, we have the following operators: 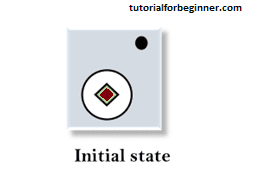 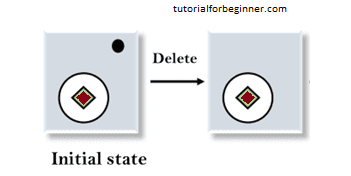 3. Applying the Move Operator: After using the Delete operator, a new state appears, which we will compare to the objective state again. After comparing these states, we notice that the square is outside the circle, so we'll use the Move Operator to fix it.

4. Applying the Expand Operator: In the third phase, a new state is created, and we will compare it to the desired state. There is still one difference between the states, which is the size of the square, so we will use the Expand operator to construct the desired state.