What is Multiple Linear Regression in Machine Learning?

“Multiple Linear Regression is one of the important regression algorithms which models the linear relationship between a single dependent continuous variable and more than one independent variable.”

Example:
Prediction of CO2 emission based on engine size and number of cylinders in a car.


Some key points about MLR:

In this step, we'll build a Simple Linear Regression model to determine which line best represents the relationship between these two variables.

To use Python to create the Simple Linear regression model in machine learning, follow the steps below:

To implement MLR using Python, we have below problem:

We have 50 start-up companies in our database. R&D Spend, Administration Spend, Marketing Spend, State, and Profit for a financial year are all included in this dataset. Our goal is to develop a model that can quickly assess which company has the highest profit margin and which element has the most impact on a company's profit margin.

Data pre-processing is the initial phase, which we've already covered in this course. The steps in this procedure are as follows:

Output: We will get the dataset as: 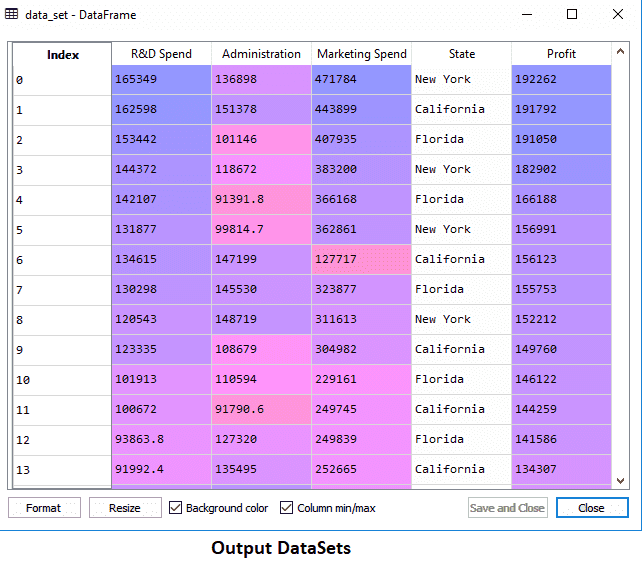 We can see that there are five variables in the above output, four of which are continuous and one of which is categorical.

As can be seen in the result above, the last column comprises categorical variables that are not suitable for fitting the model directly. As a result, we must encrypt this variable.

We will encode one categorical variable (State) because it cannot be directly applied to the model. The LabelEncoder class will be used to convert the categorical variable to integers. However, it is insufficient because there is still some relational order, which may result in an incorrect model. To solve this problem, we'll employ OneHotEncoder, which will generate dummy variables. The following is the code for it:


Because the other variables are continuous, we are only encoding one independent variable, which is state. 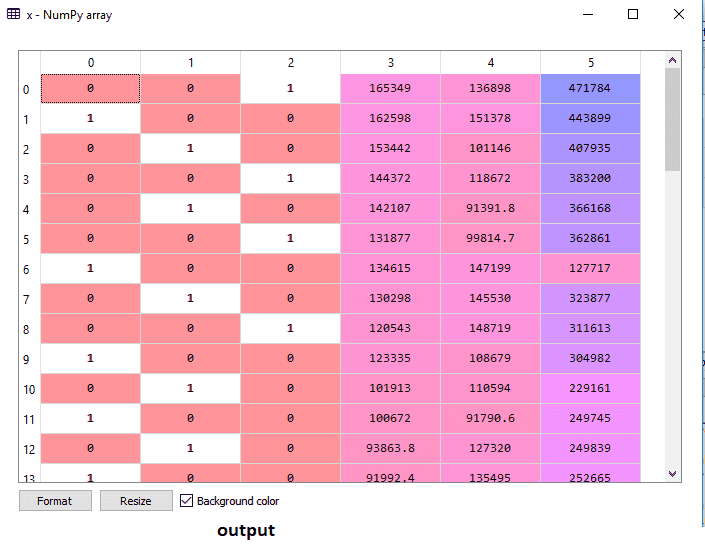 
It's possible that if we don't delete the first dummy variable, the model will become multicollinear. 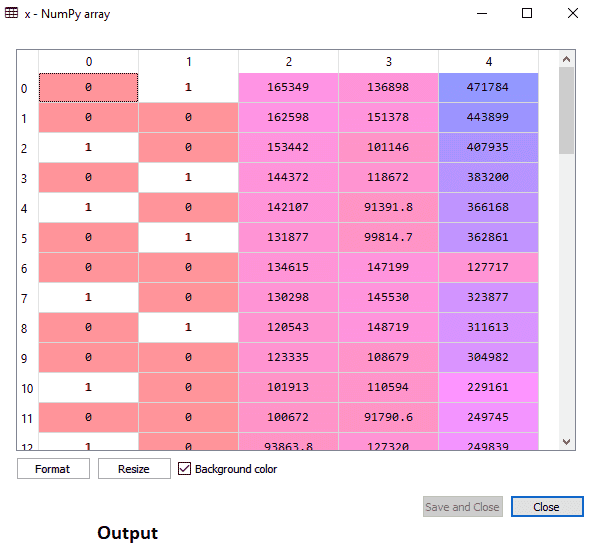 The first column has been eliminated, as seen in the output image above.

We'll now divide the dataset into two groups: training and testing. The following is the code for this:


The above code will split our dataset into a training set and test set.
The preceding code will partition the dataset into two sets: training and test. The output can be viewed by using the variable explorer option in Spyder IDE, which will display the test and training sets as shown below: 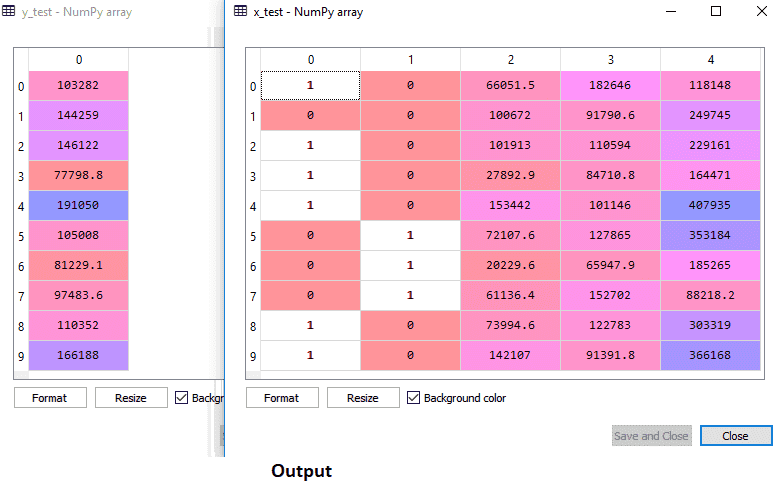 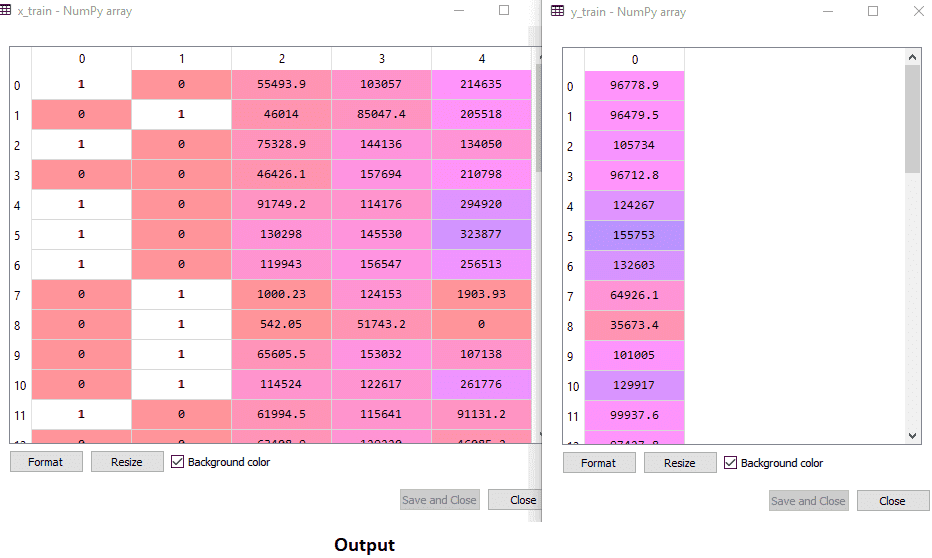 Note: We will not implement feature scaling in MLR because the library will take care of it and we won't have to do it manually.

Step: 2- Fitting our MLR model to the Training set:

Now that our dataset has been properly prepared for training, we will fit our regression model to the training set. It will be identical to the Simple Linear Regression model that we used previously. This will be coded as follows:


Output:
Out[9]: LinearRegression(copy_X=True, fit_intercept=True, n_jobs=None, normalize=False)
Using the training dataset, we've effectively trained our model. We'll use the test dataset to evaluate the model's performance in the next phase.

The final step in our model's development is to evaluate its performance. We'll do it by forecasting the outcome of the test set. A y_pred vector will be created for prediction. The code for it is as follows: 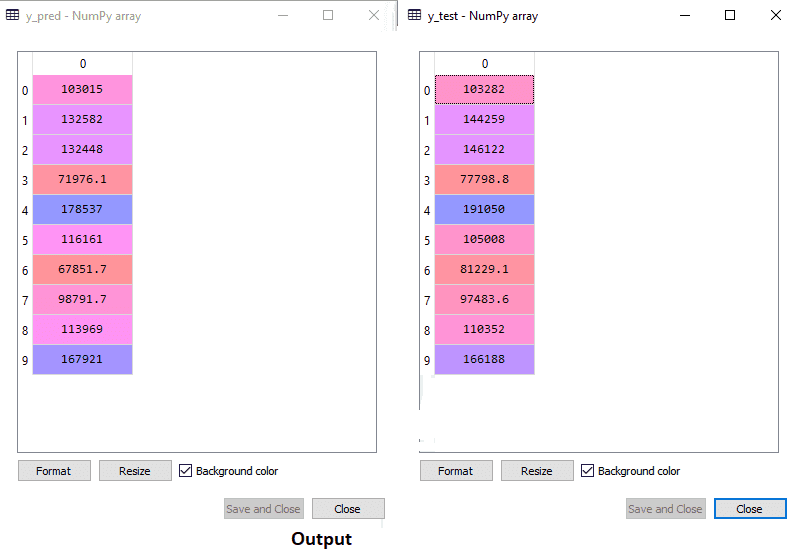 We have anticipated result set and test set in the above output. By comparing these two values index by index, we may evaluate the model's performance. The first index, for example, has predicted profit of 103015 dollars and a test/real profit of 103282 dollars. The difference is only 267 dollars, which is a good prediction, thus our model is completely complete.

We may also look at the scores for the training and test datasets. The code for it is as follows:

Output: The score is: