What is Random Forest Algorithm?

Random Forest is a well-known machine learning algorithm that uses the supervised learning method. In machine learning, it can be utilized for both classification and regression issues. It is based on ensemble learning, which is a method of integrating several classifiers to solve a complex problem and increase the model's performance.
As the name suggests, "Random Forest is a classifier that contains a number of decision trees on various subsets of the given dataset and takes the average to improve the predictive accuracy of that dataset." Instead than relying on a single decision tree, the random forest collects the forecasts from each tree and predicts the final output based on the majority votes of predictions.
The greater number of trees in the forest leads to higher accuracy and prevents the problem of overfitting.
The below diagram explains the working of the Random Forest algorithm: 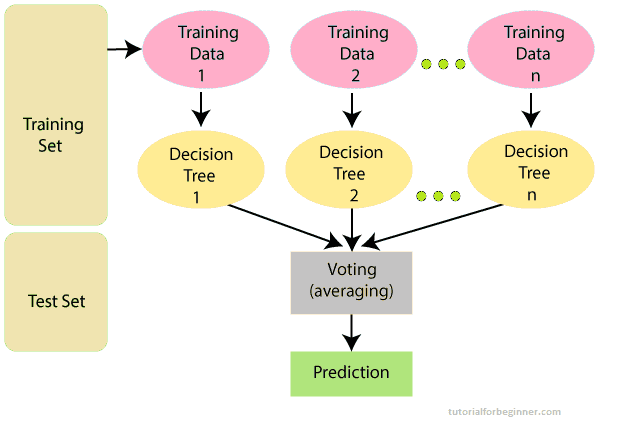 Note: You need be familiar with the Decision Tree Algorithm in order to properly comprehend the Random Forest Algorithm.

Because the random forest combines numerous trees to forecast the dataset's class, some decision trees may correctly predict the output while others may not. However, when all of the trees are combined, the proper result is predicted. As a result, two assumptions for a better Random forest classifier are as follows:

Why use Random Forest?

The following are some reasons why we should utilize the Random Forest algorithm:

How does Random Forest algorithm work?

The random forest is formed in two phases: the first is to combine N decision trees to build the random forest, and the second is to make predictions for each tree created in the first phase.
The following steps and diagram can be used to demonstrate the working process:
Step 1: Pick K data points at random from the training set.
Step 2: Create decision trees for the data points you've chosen (Subsets).
Step 3: Decide on the number N for the decision trees you wish to create.
Step 4: Repetition of Steps 1 and 2.
Step 5: Find the forecasts of each decision tree for new data points, and allocate the new data points to the category with the most votes.
The following example will help you understand how the algorithm works:

Example: There is a dataset including several fruit photos. As a result, the Random forest classifier is given this dataset. Each decision tree is given a portion of the dataset to work with. During the training phase, each decision tree generates a prediction result, and when a new data point appears, the Random Forest classifier predicts the final decision based on the majority of results. Consider the following illustration: 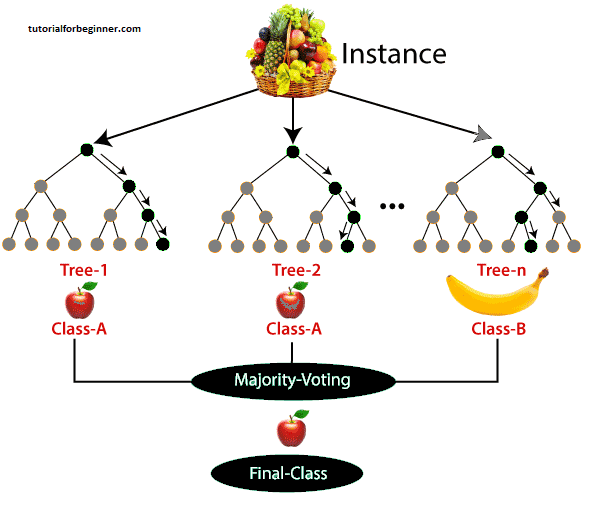 Random forest is most commonly utilized in the following four sectors:

Implementation Steps are given below:

Below is the code for the pre-processing step:

In the above code, we have pre-processed the data. Where we have loaded the dataset, which is given as: 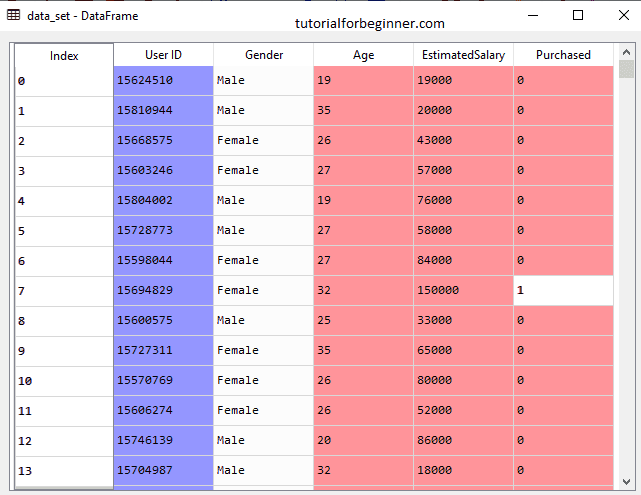 2. Fitting the Random Forest algorithm to the training set:

The Random forest algorithm will now be fitted to the training set. We'll use the RandomForestClassifier class from the sklearn.ensemble package to make it fit. The code is as follows:

The classifier object in the given code has the following parameters:

We can now anticipate the test outcome because our model has been fitted to the training data. We'll make a new prediction vector, y_pred, for prediction. The code for it is as follows:

The prediction vector is given as: 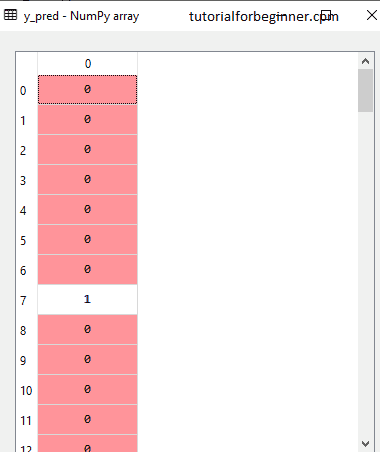 Now we'll make the confusion matrix to figure out which forecasts are true and which are incorrect. The code for it is as follows: 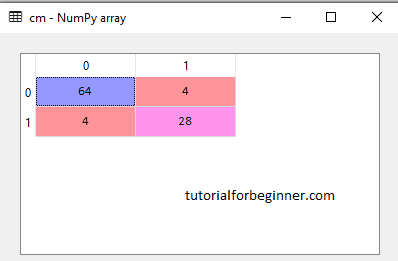 The result of the training set will be visualized here. We will plot a graph for the Random forest classifier to visualize the training set outcome. As we saw in Logistic Regression, the classifier will predict yes or no for consumers who have purchased or not purchased the SUV car. The code for it is as follows: 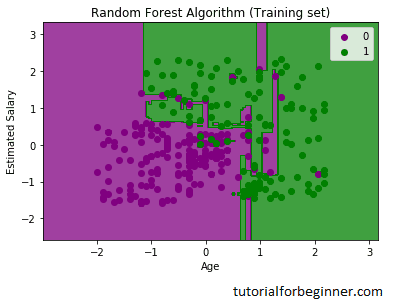 The visualization result for the Random Forest classifier using the training set result is shown above. It looks a lot like the Decision tree classifier. The purple and green zones are the prediction regions, and each data point corresponds to each user in the user data. Users who did not purchase an SUV automobile are classed in the purple region, while those who did purchase an SUV are classified in the green region.
So we took 10 trees in the Random Forest classifier that predicted Yes or NO for the Purchased variable. The classifier calculated the result based on the majority of the predictions.

Now we will visualize the test set result. Below is the code for it: 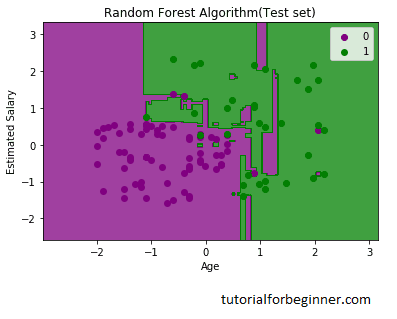 The visualization result for the test set is shown above. Without the Overfitting problem, we can confirm that there are a minimum of (8) inaccurate predictions. Changing the number of trees in the classifier yields varied outcomes.