What is Types of Encoding Techniques?

Encoding refers to the process of converting data from one form to another. It transforms data so that it can be supported and used by a variety of systems. Encoding is analogous to converting temperature from Celsius to Fahrenheit in that it simply changes the shape of the data, but the underlying value remains the same. Encoding is mostly utilized in two areas:

[ Note: encoding differs from encryption in that its primary goal is to convert data into a format that can be properly ingested rather than to hide it. ]

The numerous sorts of encoding techniques used in computing will be discussed in this topic. 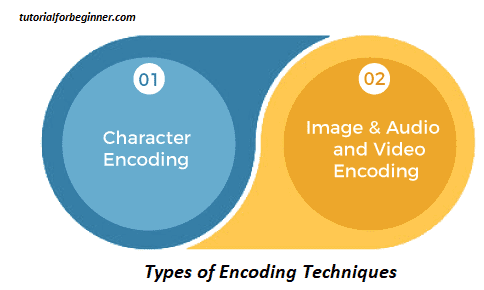 Character encoding is the process of converting characters into bytes. It instructs computers on how to convert zeros and ones into real characters, numbers, and symbols. Because the computer only understands binary data, these characters must be converted to numeric codes. Each character is transformed into binary code, and text documents are saved with encoding types to do this. It is possible to do so by combining numbers and characters. Our website will not show characters and text in a proper way if we do not use character encoding. As a result, readability will suffer, and the system will be unable to handle data correctly. Furthermore, character encoding ensures that each character has an appropriate computer or binary representation.

Character encoding schemes come in a variety of forms, as shown below:

HTML encoding is used to ensure that an HTML page is shown correctly. Encoding allows a web browser to determine which character set to use.
Various HTML Markup characters, such as <, >, are used in HTML. We'll need to employ an encoding to encode these characters as content.

Unicode is a worldwide character set encoding standard. It allows you to encode, represent, and manipulate text in almost every language or writing system available on the planet. In every supported language, it assigns a code point or number to each character. It can roughly represent all of the characters that can be found in all languages. A coding unit is a set of bits that has a specific order.

The characters in a UNICODE standard can be represented using 8, 16, or 32 bits.

The following UTF schemes are part of the UNICODE Encoding standard:

Base64 Encoding is a method of converting binary data into ASCII characters. Because mail systems like SMTP can't deal with binary data because they only allow ASCII textual data, the Base64 encoding is utilized in the Mail system. It's also used to encrypt credentials in simple HTTP authentication. Furthermore, it is used to convert binary data into cookies and other parameters in order to render data unreadable and prevent manipulation. If you send an image or other file without Base64 encoding, it will be corrupted since the mail system cannot handle binary data.

Base64 divides up into blocks of 3 bytes, with each byte containing eight bits; hence, it represents 24 bits. The 24 bits are broken down into four sets of six bits each. Each of these groups or chunks is transformed to a Base64 value equivalent.

Character encoding is defined as the American Standard Code for Information Interchange (ASCII). In 1963, it was the first character encoding standard to be published.
The ASCII code is used to represent English characters as numbers, with integers ranging from 0 to 127 allocated to each letter. The majority of modern character encoding schemes are based on ASCII, however they support a large number of extra characters. It's a single-byte encoding that only uses the lowest seven bits. Each alphabetic, numeric, or special character in an ASCII file is represented by a 7-bit binary number. Each character on the keyboard has an ASCII value that corresponds to it.

To save storage space, image, audio, and video encoding is done. An image, audio, or video file is encoded in order to save it in a more efficient and compressed format.

These encoded files retain the same material, usually of comparable quality, but in a smaller file size, allowing them to be saved in less space, conveniently sent over email, or downloaded onto the system.

It makes sense to us as a. The size of a WAV audio file is reduced by 1/10th by converting it to an MP3 file.