What is K-Nearest Neighbor(KNN) Algorithm for Machine Learning?

The K-Nearest Neighbour algorithm is based on the Supervised Learning technique and is one of the most basic Machine Learning algorithms.

Consider the following scenario: We have an image of a creature that looks like a cat or a dog, but we don't know whether it's a cat or a dog. We can utilize the KNN algorithm for this identification because it is based on a similarity measure. Our KNN model will look for similarities between the new data set and the cats and dogs photos, and categorize it as either a cat or a dog based on the most similar attributes 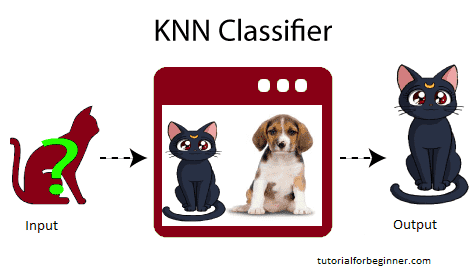 Why do we need a K-NN Algorithm?

Assume there are two categories, Category A and Category B, and we receive a new data point x1. Which of these categories will this data point fall into? A K-NN algorithm is required to address this type of problem. We can simply determine the category or class of a dataset with the help of K-NN. Consider the diagram below: 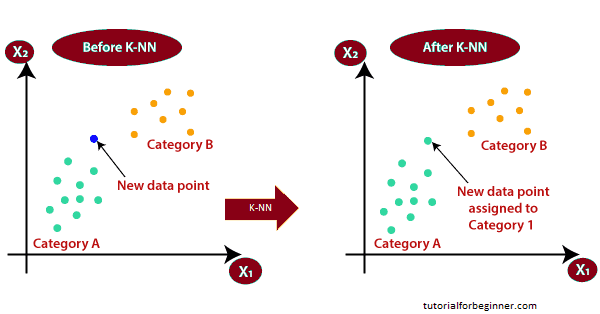 How does K-NN work?

The following algorithm can be used to describe how K-NN works:

Let's say we have a new data point that needs to be placed in the appropriate category. Consider the following illustration: 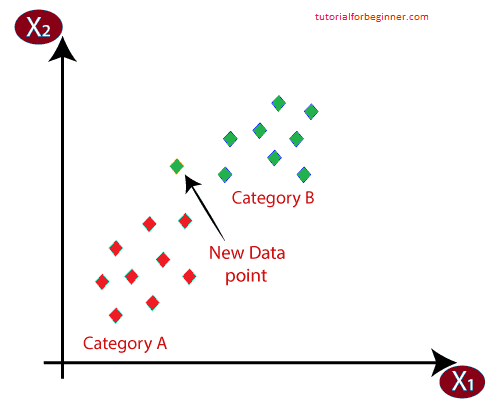 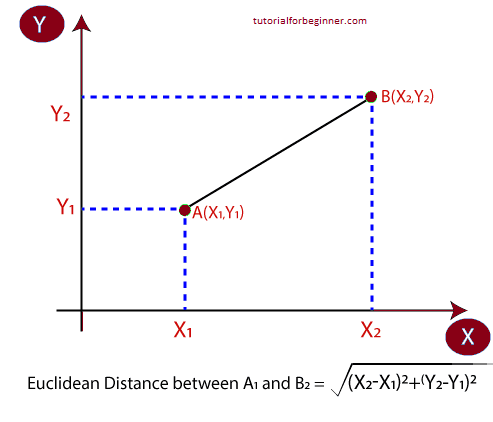 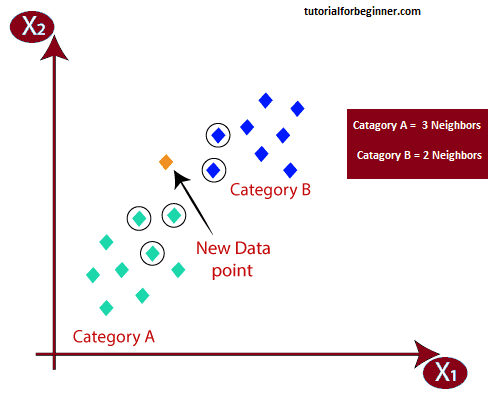 As can be seen, the three closest neighbors are all from category A, hence this new data point must also be from that category.

How to select the value of K in the K-NN Algorithm?

The following are some things to keep in mind while choosing the value of K in the K-NN algorithm:
There is no one-size-fits-all method for determining the ideal value for "K," so we'll have to experiment with a variety of options to find the greatest one. The value of K that is most commonly used is 5.
K=1 or K=2 is an extremely low value for K that might be noisy and cause outlier effects in the model.
Large K values are desirable, but they may cause problems.

Python implementation of the KNN algorithm

We will take the same issue and dataset that we used in Logistic Regression to develop the K-NN algorithm in Python. However, we will increase the model's performance here. The following is a description of the issue:
The problem for the K-NN Algorithm: A automobile manufacturer has recently released a new SUV vehicle. The corporation aims to target people who are interested in purchasing the SUV with advertisements. As a result, we have a dataset for this topic that contains information from numerous users via the social network. The dataset has a lot of information, but we'll focus on the Estimated Salary and Age as independent variables, and the Purchased variable as a dependent variable. 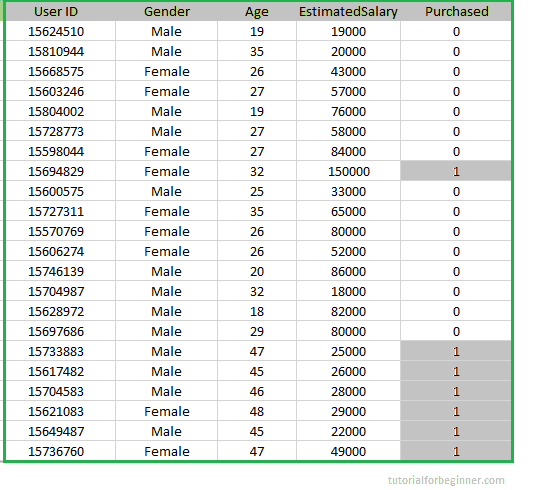 Steps to implement the K-NN algorithm:

The Data Pre-processing stage will be identical to the Logistic Regression step. The code for it is as follows:

The stage of data pre-processing will Our dataset is loaded into our software and well pre-processed by running the preceding code. Our test dataset will look like this after feature scaling: 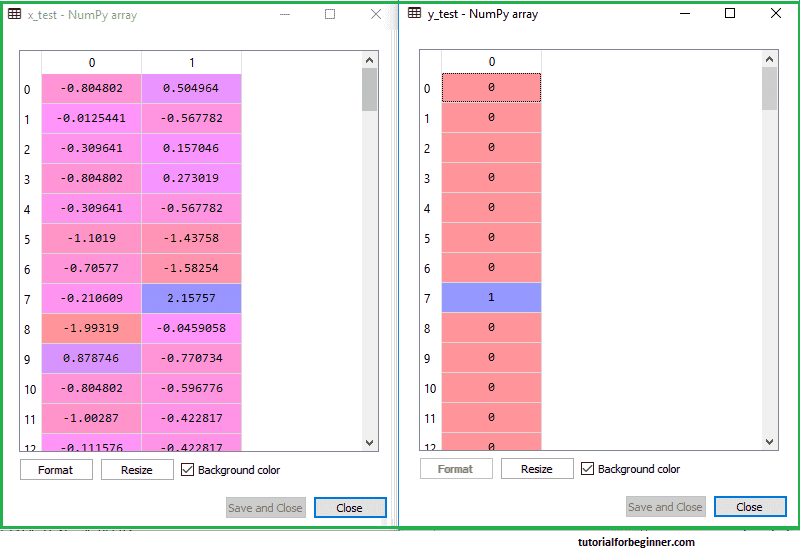 Our data has been effectively scaled, as can be seen in the above output image.

The classifier will then be fitted to the training data.

Output: By executing the above code, we will get the output as:

Predicting the Test Set Outcome: As with Logistic Regression, we'll generate a y pred vector to predict the test set result. The code for it is as follows:

Output:
The output for the above code will be: 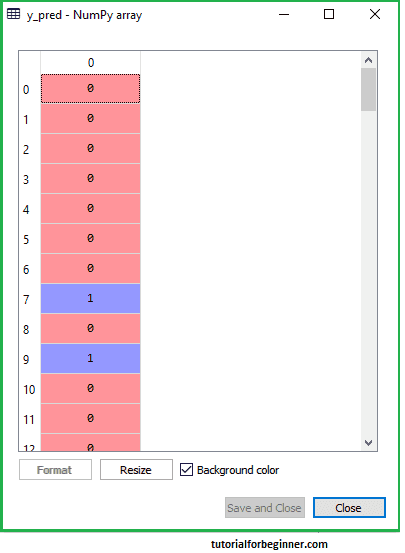 The confusion matrix function was imported and invoked using the variable cm in the above code.

The following matrix will be generated as a result of running the aforementioned code: 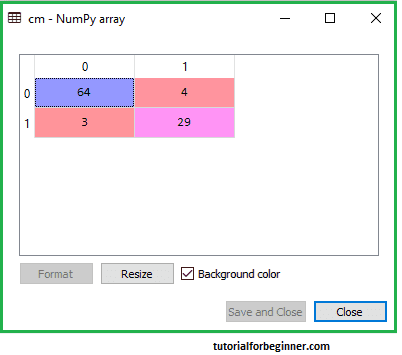 The training set result for the K-NN model will now be visualized. Except for the graph's name, the code will be the same as it was in Logistic Regression. The code for it is as follows:

By executing the above code, we will get the below graph: 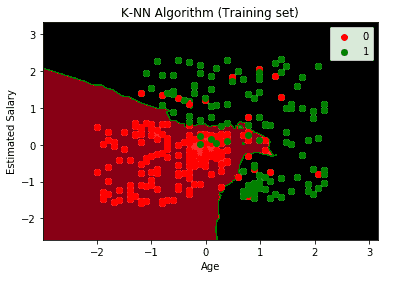 The output graph is not the same as the one that we saw in Logistic Regression. The following points will help you understand it:

After training the model, we'll place a fresh dataset, called Test dataset, in front of it to see how it performs. Except for a few minor changes, the code remains the same: x_train and y_train will be replaced with x_test and y_test, respectively.
The code for it is as follows: 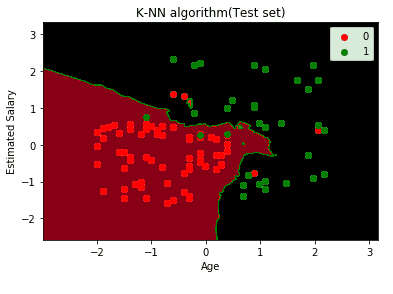 The output for the test data set is shown in the graph above. The anticipated output is really good, as most of the red points are in the red zone and most of the green points are in the green region, as seen in the graph.
However, the red region has a few green points and the green region has a few red points. So those are the erroneous observations we found in the confusion matrix (7 Incorrect output). br