What is Clustering in Machine Learning?

Clustering, often known as cluster analysis, is a machine learning technique that groups unlabeled data into groups. It can be defined as follows: "A way of grouping the data points into different clusters, consisting of similar data points. The objects with the possible similarities remain in a group that has less or no similarities with another group."

It accomplishes this by identifying comparable patterns in the unlabeled dataset, such as shape, size, color, and activity, and categorizing them according to the presence or absence of those patterns.

It is an unsupervised learning method, which means the algorithm receives no supervision and works with an unlabeled dataset.

Following the application of this clustering technique, each cluster or group is given a cluster-ID, which can be used by ML systems to facilitate the processing of huge and complicated datasets.

The clustering technique is commonly used for statistical data analysis.

Example: lets understand the clustering technique with real world example of mall: When we go to a shopping center, we notice that items that are used in the same way are grouped together. T-shirts, for example, are arranged in one section and pants in another; similarly, in the vegetable section, apples, bananas, mangoes, and other fruits and vegetables are grouped in separate sections so that we can easily discover what we're looking for. The clustering process operates in a similar manner. Clustering can also take the form of grouping materials by topic.

The clustering technique can be applied to a wide range of jobs. The following are some of the most common applications of this technique:

Apart from these basic applications, Amazon uses it in its recommendation system to make product recommendations based on previous product searches. Netflix also employs this technology to suggest movies and web series to its subscribers based on their viewing habits.

The clustering algorithm is depicted in the diagram below. The many fruits are classified into multiple groups with comparable qualities, as can be shown. 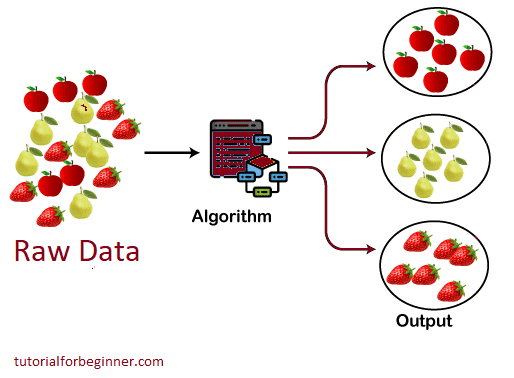 The dataset is partitioned into a collection of k groups in this type, with K indicating the number of pre-defined groups. The cluster center is designed so that the distance between data points in one cluster is the shortest possible when compared to another cluster centroid. 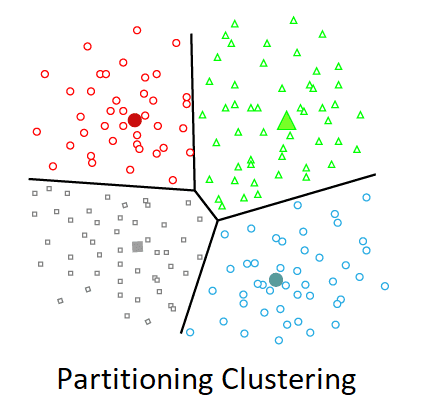 The density-based clustering method joins dense areas into clusters, resulting in arbitrary shaped distributions as long as the dense region can be linked. This program accomplishes this by finding several clusters in the dataset and connecting high-density areas into clusters. In data space, sparser zones separate dense areas from each other.

If the dataset includes varied densities and large dimensions, these algorithms may have trouble grouping the data points. 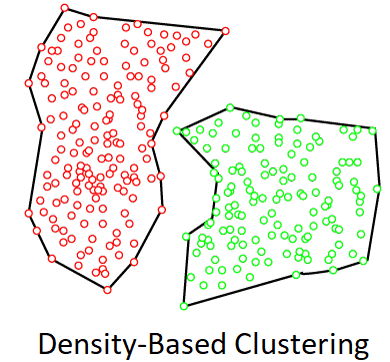 The data is separated based on the probability of how a dataset conforms to a certain distribution in the distribution model-based clustering method. The grouping is accomplished by assuming some distributions, the most popular of which is the Gaussian Distribution.

The Expectation-Maximization Clustering algorithm, which employs Gaussian Mixture Models, is an example of this type (GMM). 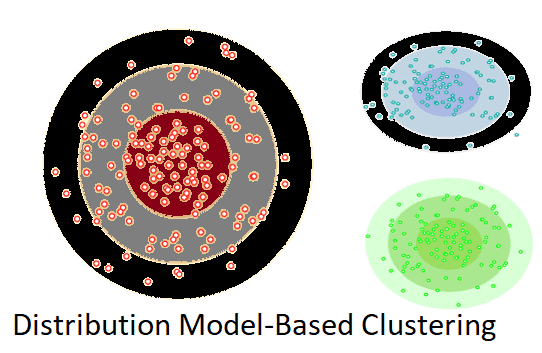 Because there is no need to pre-specify the number of clusters to be produced, hierarchical clustering can be utilized as an alternative to partitioned clustering. The dataset is separated into clusters in this technique, which results in a tree-like structure known as a dendrogram. By pruning the tree at the proper level, you can select the observations or any number of clusters. The Agglomerative Hierarchical algorithm is the most common example of this strategy.

Clustering methods are classified according to their models, which are described above. Various clustering techniques have been described, but only a few are widely utilized. The clustering algorithm is determined by the type of data we're working with. Some algorithms, for example, must guess the number of clusters in a given dataset, while others must identify the shortest distance between the dataset's observations.

The following are some of the most extensively used Clustering algorithms in machine learning:

The following are some well-known clustering applications in Machine Learning: