What is Polynomial Regression in Machine Learning?

Hence, "In Polynomial regression, the original features are converted into Polynomial features of required degree (2,3,..,n) and then modeled using a linear model."

The importance of polynomial regression in machine learning can be shown in the following points:

Note: A Polynomial Regression algorithm is sometimes known as Polynomial Linear Regression since it is based on coefficients that are ordered in a linear form rather than variables.

Note: You must be familiar with Simple Linear Regression in order to comprehend Polynomial Regression.

We will use Python to implement Polynomial Regression. By contrasting the Polynomial Regression model with the Simple Linear Regression model, we will be able to comprehend it. So, initially, let's define the problem for which the model will be developed.
The problem is that there is a Human Resource firm that is going to hire a new employee. The candidate has stated that his prior pay was 160K per year, and HR must determine whether he is speaking the truth or making a bluff. So far, all they have is a dataset from his prior employer, which lists the wages of the top ten positions along with their levels. We discovered a non-linear association between the Position levels and salaries by examining the dataset available. Our goal is to create a Bluffing Detection Regression Model that will allow HR to pick a trustworthy candidate. The steps for making such a model are outlined below.

The main steps involved in Polynomial Regression are given below:

With a few exceptions, the data pre-processing procedure will be the same as in previous regression models. We will not employ feature scaling in the Polynomial Regression model, and we will not partition our dataset into training and test sets. There are two reasons for this:

The following is the code for the pre-processing step:

Output:
By executing the above code, we can read our dataset as: 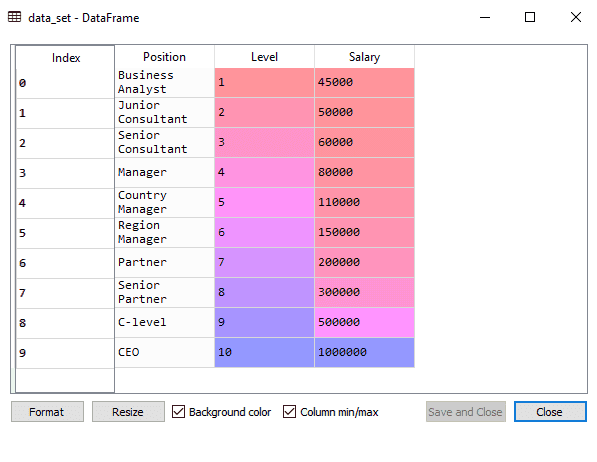 There are three columns in the above output, as we can see (Positions, Levels, and Salaries). However, we'll simply look at two columns because Positions are comparable to levels or can be thought of as the encoded version of Positions.
Because the candidate has 4+ years of experience as a regional manager, he must be somewhere between levels 7 and 6, thus we'll anticipate the output for level 6.5.


Using the lin regs object of the LinearRegression class, we generated a Simple Linear model and fitted it to the dataset variables in the code above (x and y).

We'll now construct the Polynomial Regression model, which will differ slightly from the Simple Linear model. Because the PolynomialFeatures class of the preprocessing library will be used here. This class is used to add some more features to our dataset.

We used poly regs.fit transform(x) in the above lines of code because we are first turning our feature matrix into a polynomial feature matrix and then fitting it to the Polynomial regression model. The value of the parameter (degree= 2) is determined by our choosing. We can select it based on our Polynomial characteristics.
We will get another matrix x poly after running the code, which can be inspected under the variable explorer option: 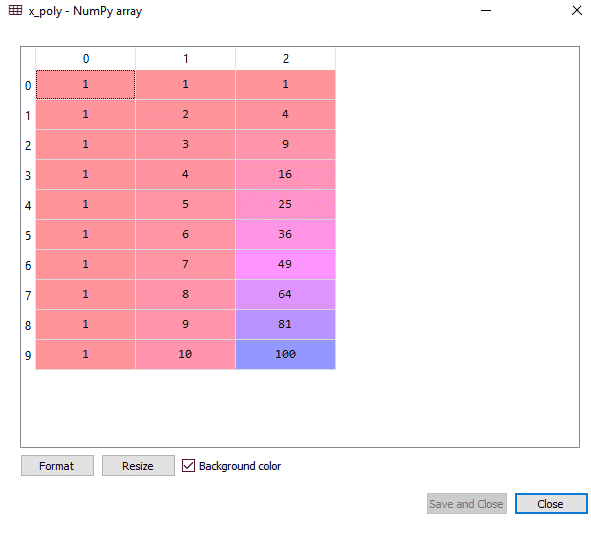 Then, we have used another LinearRegression object, which is lin_reg_2, to fit our x_poly vector to the linear model.

Visualizing the result for Linear regression:

Now, much as we did with Simple Linear Regression, we'll visualize the outcome for the Linear regression model. The code for it is as follows: 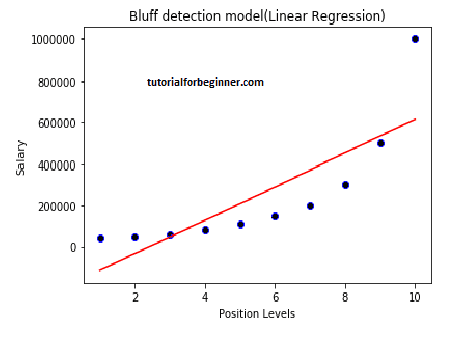 The regression line is clearly separated from the datasets in the above output image. Predictions are represented by a red straight line, whereas actual values are represented by blue points. If we use this output to estimate the worth of a CEO, we get a pay of around 600000 dollars, which is significantly below the real value.

As a result, rather of a straight line, we require a curved model to suit the dataset.

The output of the Polynomial regression model, whose code is slightly different from the above model, will be visualized below.
Code for this is given below:

In the code above, we have taken lin_reg_2.predict(poly_regs.fit_transform(x), instead of x_poly, because we want a Linear regressor object to predict the polynomial features matrix. 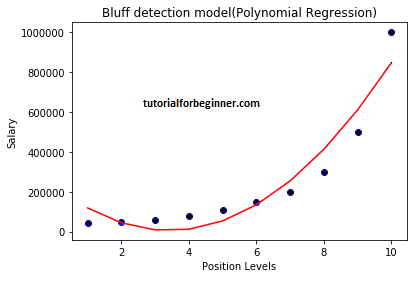 The forecasts are close to the real numbers, as shown in the above output image. As we modify the degree, the plot above will change.

For a degree = 3
We can get a more accurate plot if we change the degree=3, as illustrated in the image below. 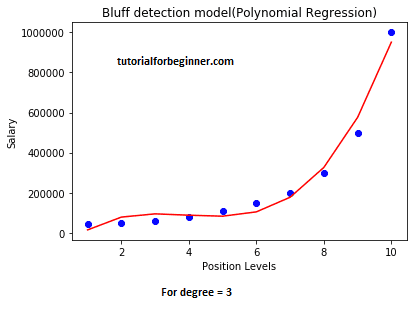 As can be seen in the above output image, the forecasted salary for level 6.5 is around 170K$-190K$, implying that the prospective employee is telling the truth about his income.
Change the degree= 4 once more, and you'll have the most exact plot now. As a result, raising the degree of Polynomial will yield more accurate findings. 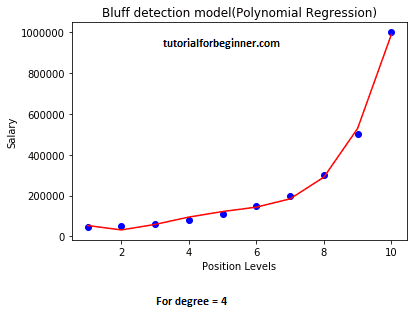 Using the Linear Regression model to predict the final result:

To determine if an employee is telling the truth or making a bluff, we will use the Linear regression model to predict the final outcome. So, we'll utilize the predict() method and pass the value 6.5 as a parameter. The code for it is as follows:

As we can see, the Polynomial Regression's projected output is [158862.45265153], which is significantly closer to the real value, so we can conclude that the future employee is correct.