What is Dimensionality Reduction?

The term "dimensionality reduction technique" refers to the process of reducing the number of dimensions. It can be defined as, "It is a way of converting the higher dimensions dataset into lesser dimensions dataset ensuring that it provides similar information." These methods are commonly utilized in machine learning to develop a more accurate predictive model while solving classification and regression challenges.

Speech recognition, signal processing, bioinformatics, and other fields that deal with high-dimensional data use it frequently. It can also be used to visualize data, reduce noise, and do cluster analysis, among other things. 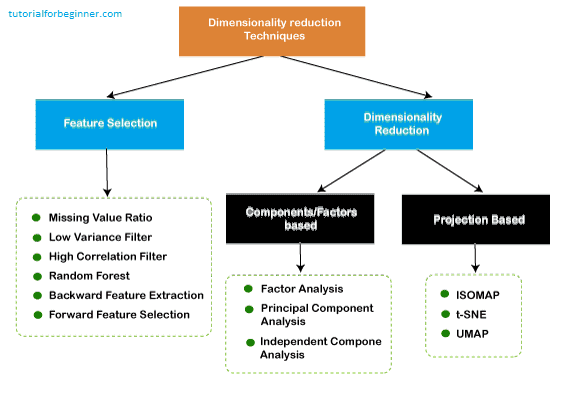 The Curse of Dimensionality

The curse of dimensionality refers to the difficulty of dealing with high-dimensional data in practice. Any machine learning technique and model becomes increasingly sophisticated as the dimensionality of the input dataset grows. As the number of features grows, the number of samples grows proportionally as well, increasing the risk of overfitting. When a machine learning model is trained on large amounts of data, it becomes overfitted and performs poorly.

As a result, it is frequently necessary to reduce the amount of features, which can be accomplished by dimensionality reduction.

The following are some of the advantages of using a dimensionality reduction technique on a given dataset:

There are a few drawbacks to using dimensionality reduction, which are listed below:

There are two ways to apply the dimension reduction technique, which are given below:

The feature selection is done in three ways:

Some common feature extraction techniques are:

The variance of each characteristic is taken into account by PCA since the high attribute indicates a good separation between the classes and so minimizes dimensionality. Image processing, movie recommendation systems, and optimizing power allocation in multiple communication channels are some of the real-world uses of PCA.

When creating a Linear Regression or Logistic Regression model, the backward feature elimination strategy is commonly utilized. The following steps are used in this strategy to reduce dimensionality or select features:

We can specify the ideal amount of features required for machine learning algorithms using this strategy, which involves picking the best model performance and the highest tolerable error rate.

The backward elimination method is reversed in the forward feature selection phase. It indicates that in this strategy, we won't remove a feature; instead, we'll locate the greatest characteristics that will boost the model's performance the most. This approach involves the following steps:

If there are too many missing values in a dataset, we remove those variables because they don't provide much information. To do this, we may specify a threshold level, and if a variable has more missing values than that threshold, the variable will be dropped. The more efficient the reduction, the higher the threshold value.

Data columns with certain changes in the data have less information, just like the missing value ratio technique. As a result, we must calculate the variance of each variable, and all data columns with variance less than a certain threshold must be removed, as low variance characteristics will have no effect on the target variable.

When two variables provide essentially similar information, this is referred to be high correlation. The model's performance may be harmed as a result of this factor. The estimated value of the correlation coefficient is based on the correlation between the independent numerical variables. We can eliminate one of the variables from the dataset if this value is higher than the threshold value. Those factors or traits with a high correlation with the target variable can be considered.

In machine learning, Random Forest is a common and helpful feature selection approach. We don't need to program the feature importance package separately because this method has one built in. In this strategy, we need to create a huge number of trees against the target variable, and then locate the subset of features using usage statistics for each attribute.

Because the random forest technique uses only numerical variables, we must use hot encoding to convert the input data to numeric data.

For example, if we have two variables, Income and Spend, we can grasp it. These two factors are highly correlated, implying that those with higher income spend more, and vice versa. As a result, similar variables are grouped together, and that group is referred to as the factor. In comparison to the dataset's original dimension, the number of these factors will be reduced.

The auto-encoder, which is a sort of ANN or artificial neural network with the goal of copying inputs to outputs, is one of the most prominent methods of dimensionality reduction. This compresses the input into a latent-space representation, which is then used to produce the output. It is divided into two sections:

Encoder: The encoder's job is to compress the input so that the latent-space representation may be formed.

Decoder: The decoder's job is to reconstruct the output from the latent-space representation.